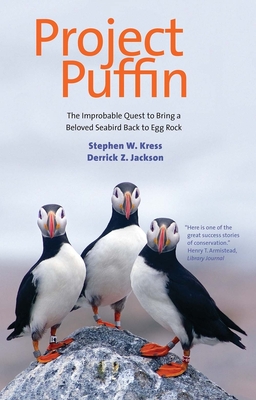 is the inspiring story of how a beloved seabird was restored to long-abandoned nesting colonies off the Maine coast. As a young ornithology instructor at the Hog Island Audubon Camp, Dr. Stephen W. Kress learned that puffins had nested on nearby islands until extirpated by hunters in the late 1800s. To right this environmental wrong, he resolved to bring puffins back to one such island—Eastern Egg Rock. Yet bringing the plan to reality meant convincing skeptics, finding resources, and inventing restoration methods at a time when many believed in “letting nature take its course.”

Today, Project Puffin has restored more than 1,000 puffin pairs to three Maine islands. But even more exciting, techniques developed during the project have helped to restore rare and endangered seabirds worldwide. Further, reestablished puffins now serve as a window into the effects of global warming. The success of Dr. Kress’s project offers hope that people can restore lost wildlife populations and the habitats that support them. The need for such inspiration has never been greater.

Stephen W. Kress is the National Audubon Society’s Vice President for Bird Conservation and director of the Audubon Seabird Restoration Program and Hog Island Audubon Camp. Derrick Z. Jackson, a Pulitzer Prize finalist for commentary and an accomplished photographer, is a contributing columnist at the Boston Globe. He lives in Cambridge, MA.
Loading...
or support indie stores by buying on