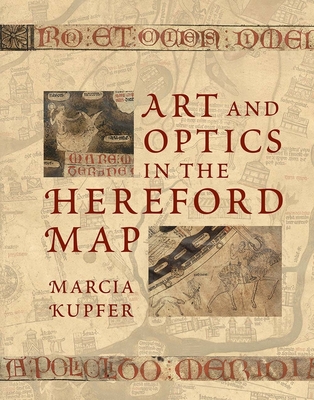 Art and Optics in the Hereford Map

A single, monumental mappa mundi (world map), made around 1300 for Hereford Cathedral, survives intact from the Middle Ages. As Marcia Kupfer reveals in her arresting new study, this celebrated testament to medieval learning has long been profoundly misunderstood. Features of the colored and gilded map that baffle modern expectations are typically dismissed as the product of careless execution. Kupfer argues that they should rightly be seen as part of the map’s encoded commentary on the nature of vision itself. Optical conceits and perspectival games formed part of the map’s language of vision, were central to its commission, and shaped its display, formal design, and allegorical fabric. These discoveries compel a sweeping revision of the artwork’s intellectual and art-historical genealogy, as well as its function and aesthetic significance, shedding new light on the impact of scientific discourses in late medieval art.

Marcia Kupfer contributes to the study of medieval art as an independent scholar based in Washington, DC.
Loading...
or
Not Currently Available for Direct Purchase