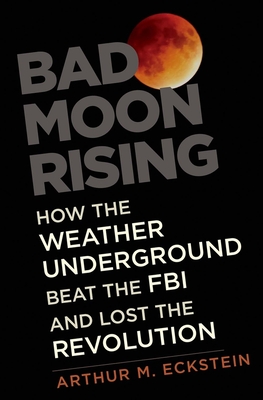 How the Weather Underground Beat the FBI and Lost the Revolution

A startling history of the forlorn war between the Weather Underground and the FBI, based on interviews and 30,000 pages of previously unreleased FBI documents

In the summer of 1970 and for years after, photos of Bill Ayers, Bernadine Dohrn, Jeff Jones, and other members of the Weather Underground were emblazoned on FBI wanted posters. In Bad Moon Rising, Arthur Eckstein details how Weather began to engage in serious, ideologically driven, nationally coordinated political violence and how the FBI attempted to monitor, block, and capture its members—and failed. Eckstein further shows that the FBI ordered its informants inside Students for a Democratic Society (SDS) to support the faction that became Weather during the tumultuous June 1969 SDS convention, helping to destroy the organization; and that  the FBI first underestimated Weather’s seriousness, then overestimated its effectiveness, and how Weather outwitted them. Eckstein reveals how an obsessed and panicked President Nixon and his inner circle sought to bypass a cautious J. Edgar Hoover, contributing to the creation of the rogue Plumbers Unit that eventually led to Watergate.


Praise For Bad Moon Rising: How the Weather Underground Beat the FBI and Lost the Revolution…

"Bad Moon Rising is justified by new evidence, some of which will be surprising to all concerned, while others definitely put old arguments to rest."—ArtsFuse
— ArtsFuse

Arthur M. Eckstein is professor of history and distinguished scholar-teacher at the University of Maryland, College Park.
Loading...
or
Not Currently Available for Direct Purchase