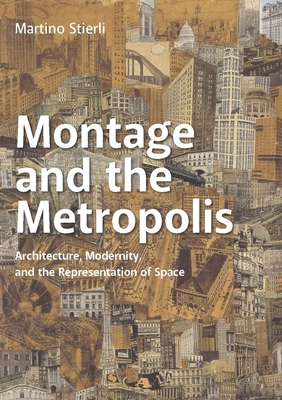 Montage and the Metropolis

Architecture, Modernity, and the Representation of Space

Montage has been hailed as one of the key structural principles of modernity, yet its importance to the history of modern thought about cities and their architecture has never been adequately explored. In this groundbreaking new work, Martino Stierli charts the history of montage in late 19th‑century urban and architectural contexts, its application by the early 20th‑century avant‑gardes, and its eventual appropriation in the postmodern period. With chapters focusing on photomontage, the film theories of Sergei Eisenstein, Mies van der Rohe’s spatial experiments, and Rem Koolhaas’s use of literary montage in his seminal manifesto Delirious New York (1978), Stierli demonstrates the centrality of montage in modern explorations of space, and in conceiving and representing the contemporary city. Beautifully illustrated, this interdisciplinary book looks at architecture, photography, film, literature, and visual culture, featuring works by artists and architects including Mies, Koolhaas, Paul Citroen, George Grosz, Hannah Höch, El Lissitzky, and Le Corbusier.

Praise For Montage and the Metropolis: Architecture, Modernity, and the Representation of Space…

“Through words, and 157 wonderfully curated images, Stierli describes the arrival of montage as a (and possibly the) dominant shaper of modernity, deftly charting its rise and multiple appearances through the avant-garde, architecture and cinema.”—Simon von Wolkenstein, Architectural Theory Review

"Stierli's brilliant study is destined to embed montage indelibly in the heart of modernism . . . Stierli is resourceful in identifying montage in its many iterations, and the range of scholarship that informs this book is simply breathtaking."—J. Quinan, Choice

“For the academically minded architecture enthusiast, MoMA curator Martino Stierli takes a deep dive into the history of montage, a distinctly 20th-century compositional technique. Stierli casts a wide net, looking at sociology, the arts, film, and many schools of architecture—everyone from Piranesi to Rem Koolhaas makes an appearance.”—Metropolis Editors, Metropolis Magazine

"Montage and the Metropolis is a substantial achievement. The author provides an elegant and compelling history of architectural montage in modernism, with a provocative extension to the postmodern.”—Claire Zimmerman, author of Photographic Architecture in the Twentieth Century

“Montage and the Metropolis is a landmark contribution to our understanding of how modern architecture emerged in dialogue with film, photography, and the visual arts.”—Edward Dimendberg, author of Diller Scofidio + Renfro: Architecture after Images

Martino Stierli is Philip Johnson Chief Curator of Architecture and Design at the Museum of Modern Art.
Loading...
or
Not Currently Available for Direct Purchase