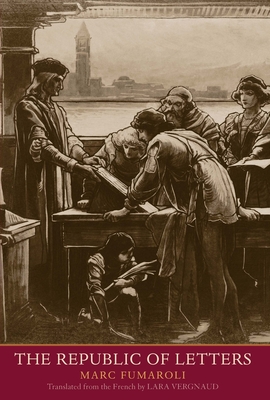 In this fascinating study, preeminent historian Marc Fumaroli reveals how an imagined “republic” of ideas and interchange fostered the Italian Renaissance, the Enlightenment, and the French Revolution. He follows exchanges among Petrarch, Erasmus, Descartes, Montaigne, and others from the fifteenth through the eighteenth centuries, through revolutions in culture and society. Via revealing portraits and analysis, Fumaroli traces intellectual currents engaged with the core question of how to live a moral life—and argues that these men of letters provide an example of the exchange of knowledge and ideas that is worthy of emulation in our own time. Combining scholarship, wit, and reverence, this thought‑provoking volume represents the culmination of a lifetime of scholarship.

"The Republic of Letters concentrates the fruits of a lifetime of study into 18 erudite chapters . . . ably translated by Lara Vergnaud."—Laura Auricchio, Wall Street Journal

“The Republic of Letters is one of those fascinating history books that introduces an almost completely new element of analysis into already well-known events . . . [It] delves into a now-forgotten element of the past . . . and thus makes the past more real.”—Addison Del Mastro, University Bookman

“This book is both a scholarly achievement and a significant intellectual statement. Without preaching, Fumaroli transmits the allure of belonging to an intellectual community that is humble enough to recognize a prior culture better than itself”—Daniel  Gordon, American Historical Review

“A tour de force. Fumaroli’s long-awaited book brings us a lifetime of his scholarship, his wisdom, and (refreshingly) of his caution.  Here is a book to savor.”—Jay Winter, Yale University

“Fumaroli is recognized internationally as one of the most eminent and erudite scholars in this area. The Republic of Letters is significant for the questions it raises and fruitful debates it may generate.”—André Benhaim, Princeton University

Marc Fumaroli is a professor emeritus at the Collège de France and a member of the British Academy, the Académie française, the American Academy of Arts and Sciences, and the Société d’histoire littéraire de la France. Lara Vergnaud is a French‑English translator based in Washington, DC.
Loading...
or
Not Currently Available for Direct Purchase