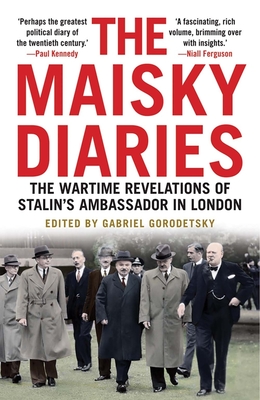 The Wartime Revelations of Stalin's Ambassador in London

Highlights of the extraordinary wartime diaries of Ivan Maisky, Soviet ambassador to London

The terror and purges of Stalin’s Russia in the 1930s discouraged Soviet officials from leaving documentary records let alone keeping personal diaries. A remarkable exception is the unique diary assiduously kept by Ivan Maisky, the Soviet ambassador to London between 1932 and 1943. This selection from Maisky's diary, never before published in English, grippingly documents Britain’s drift to war during the 1930s, appeasement in the Munich era, negotiations leading to the signature of the Ribbentrop–Molotov Pact, Churchill’s rise to power, the German invasion of Russia, and the intense debate over the opening of the second front.

Maisky was distinguished by his great sociability and access to the key players in British public life. Among his range of regular contacts were politicians (including Churchill, Chamberlain, Eden, and Halifax), press barons (Beaverbrook), ambassadors (Joseph Kennedy), intellectuals (Keynes, Sidney and Beatrice Webb), writers (George Bernard Shaw, H. G. Wells), and indeed royalty. His diary further reveals the role personal rivalries within the Kremlin played in the formulation of Soviet policy at the time. Scrupulously edited and checked against a vast range of Russian and Western archival evidence, this extraordinary narrative diary offers a fascinating revision of the events surrounding the Second World War.

Praise For The Maisky Diaries: The Wartime Revelations of Stalin's Ambassador in London…

"[Maisky's] vast diary is a fascinating and invaluable source on wartime relations between Moscow and London. . . . A triumph of meticulous scholarship and enlightened publishing."—David Reynolds, Times Literary Supplement
"Its candid depictions of the British political and social scene . . . are a find of historic importance and fascination."—Nicholas Shakespeare, The Daily Telegraph
"Maisky’s wonderful diary offers refreshing insights into the turbulent 1930s. . . . Sparkled amid his fascinating observations of momentous developments is some delightful gossip, to which Maisky was addicted. . . . Maisky’s painful reflections on the British character remind one of Samuel Pepys or Dr. Johnson."—Gerard DeGroot, The Times
"Maisky was . . . clever, cultured, an exceptionally shrewd observer of Britain during his 11 years as ambassador in London from 1932. . . . Maisky’s diaries make a significant new contribution to the historiography of his time, for which their editor deserves congratulations."—Max Hastings, Sunday Times
"Deftly edited by Gabriel Gorodetsky. . . . This is a must-read for aficionados of diplomatic history and especially of interwar British high society."—Stephen Kotkin, The Wall Street Journal
"A gripping mixture of scholarship and gossip, filled with uncensored sketches of Churchill, Eden, Chamberlain and Lloyd George."—Nicholas Shakespeare, Daily Telegraph
"Edited with scrupulous care by the historian Gabriel Gorodetsky, his diaries offer captivating perspectives. . . . Maisky comes across as surprisingly humane, wry, and self-aware, and his conversations with Churchill are utterly gripping. Nobody interested in the period will want to miss them."—Dominic Sandbrook, Sunday Times
"The astonishing emergence of Maisky’s diaries is like something from the pages of Gogol or Doestoevsky – real life Notes From the Underground. Roll on the complete edition – and bravo Gorodetsky and Yale University Press."—Robert Carver, The Tablet

“There is the rare book whose publication is itself an important event. This book is just that. . .  I was struck by its immediacy and frankness, by Maisky’s astute and penetrating insights, and by his superb prose.”
—A.G. Noorani, Frontline

"The diary provides a valuable—and highly readable—insight into the Soviet view of events leading up to World War II."—Joseph Goulden, The Washington Times
"Ivan Maisky was an amazing diplomat by anyone’s standards, and it turns out that he was an amazing diarist as well. . . . The diaries give readers a chance to meet a significant figure from this period who eschewed leaden Soviets-peak and candidly shared his doubts, convictions, fears, hopes, and frailties with honesty and clarity."—Foreign Affairs
"[Maisky’s] diaries, recovered from Russian archives and superbly edited by Gabriel Gorodetsky, are exceptionally vivid."—Michael Ignatieff, The New York Review of Books
"The forthcoming publication of the complete diaries of Ivan Maisky will provide scholars of prewar and World War II diplomacy with an invaluable primary source. Meanwhile, the present abridgement, with its many reproductions of photos from Maisky’s personal albums, beautifully fulfills a primary goal of the publisher and editor to make Maisky’s observations and insights . . .accompanied by Gabriel Gorodetsky’s skilled contextualizing of them."—Walter G. Moss, Michigan War Studies Review
"This magnificently absorbing and expertly edited volume furnishes an invaluable glimpse into Soviet and British diplomacy."—Jacob Heilbrunn, The National Interest
"The Maisky Diaries is an invaluable work for anybody interested in European foreign affairs from 1932 to 1943."—Tony Demchak, H-Net Reviews
Received a special mention as an outstanding contribution for the Pushkin House Russian Book Prize
"A fascinating, rich volume, brimming over with insights into two radically different worlds. It only whets the reader's appetite for the full three-volume edition . . . which will surely stand as one of the great achievements of twenty-first century historical scholarship."—Niall Ferguson
"Maisky’s diary, impeccably edited by Gabriel Gorodetsky, is not only a work of major historical importance. It also provides an utterly fascinating view of Anglo-Soviet relations and British politics during the critical period of 1932 to 1943."—Antony Beevor
"Astonishing! Really remarkable. . . . Perhaps the greatest political diary of the twentieth century."—Paul Kennedy


"It is a book that makes us understand the period of appeasement afresh, tells the human story of an un-Bolshevik character teetering on the edge of Stalinist disaster, and reminds us just how important great diplomats have been in dangerous times."—Andrew Marr, New Statesman
— Andrew Marr

"These diaries throw new light from a fresh angle on the lead-up to 1939 and the subsequent course of the war . . . this is an exceptionally readable, as well as important, story."—John Joliffe, Spectator
— John Joliffe

‘Recently discovered diaries by the Soviet ambassador to the UK from 1932 give fascinating insights into Britain before and during the war.’  - The Sunday Times

Gabriel Gorodetsky is a Quondam Fellow of All Souls College, Oxford, and emeritus professor of history at Tel Aviv University.
Loading...
or
Not Currently Available for Direct Purchase