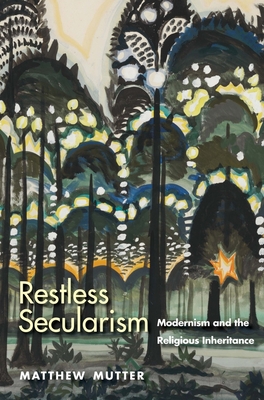 Modernism and the Religious Inheritance

Matthew Mutter provides a broad survey of modernist literature, examining key works against a background of philosophy, theology, intellectual and social history, while tracing the relationship of modernism’s secular imagination to the religious cultures that both preceded and shaped it. Mutter’s provocative study demonstrates how, despite their explicit desire to purify secular life of its religious residues, Wallace Stevens, Virginia Woolf, and other literary modernists consistently found themselves entangled in the religious legacies they disavowed.


Praise For Restless Secularism: Modernism and the Religious Inheritance…

“Mutter combines the lucid scrutinies of a literary critic with the theoretical astuteness of a theorist of religion and “the secular” to cast new light on modernism, modern religious life, and the prospects for commerce between them.”— Charles Mathewes, University of Virginia

"Matthew Mutter's book is a remarkably wise study of the tensions surrounding secularism and religion as they make their impact on four major writers: Wallace Stevens, Virginia Woolf, W. B. Yeats, and W. H. Auden. His book is a constant pleasure to read."— Denis Donoghue, New York University
— Denis Donoghue

“This brilliant study argues that secularization involves much more than acceptance of a world without god; it requires a searching and complex new imagining of the world. Mutter shows how modern literature engages us in this difficult transition, revealing its perils and rewards.”—Bonnie Costello, Boston University
— Bonnie Costello

“This study establishes Mutter among the finest scholars of modernism of his generation.”—Jeffrey M. Perl, Bar-Ilan University
— Jeffrey M. Perl

"This is a powerful interpretation of four great moderns who celebrated the physical world and honored the reality of something beyond it."—David Bromwich, Yale University

"A lucid and original work that will make an immediate contribution to modernist studies."—Michael Levenson, University of Virginia

Matthew Mutter is assistant professor of literature at Bard College.
Loading...
or
Not Currently Available for Direct Purchase