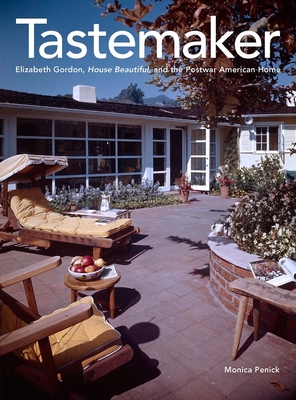 From 1941 to 1964, House Beautiful magazine’s crusading editor-in-chief Elizabeth Gordon introduced and promoted her vision of “good design” and “better living” to an extensive middle-class American readership. Her innovative magazine-sponsored initiatives, including House Beautiful’s Pace Setter House Program and the Climate Control Project, popularized a “livable” and decidedly American version of postwar modern architecture. Gordon’s devotion to what she called the American Style attracted the attention of Frank Lloyd Wright, who became her ally and collaborator. Gordon’s editorial programs reshaped ideas about American living and, by extension, what consumers bought, what designers made, and what manufacturers brought to market. This incisive assessment of Gordon’s influence as an editor, critic, and arbiter of domestic taste reflects more broadly on the cultures of consumption and identity in postwar America. Nearly 200 images are featured, including work by Ezra Stoller, Maynard Parker, and Julius Shulman. This important book champions an often-neglected source—the consumer magazine—as a key tool for deepening our understanding of mid-century architecture and design.

“Penick has studied Elizabeth Gordon for a decade and a half. Her book Tastemaker . . . is the most comprehensive tome to date on Gordon’s life and work.”–Daisy Alioto, Curbed

“Gordon will get her moment in the sun, too, with Monica Penick’s new book, Tastemaker (Yale University Press), which I can’t put down!”–Sophie Donelson, House Beautiful

“The hundreds of images are of the highest possible quality, truly representing the time and era they depict. With this unique volume, Penick (design studies, Univ.of Wisconsin, Madison) makes a significant contribution to the literature on 20th-century American design and culture.”–Robert Meden, Choice

“An important source on the postwar period and an excellent model for architectural biographies. Penick convincingly situates and contextualizes the story of a single individual within a larger historical narrative and, in doing so, highlights the role of magazine editors as propagandists in the history of American and modern architecture and design.”–Paula Lupkin, JSAH

Winner of the 2019 SESAH Publication Awards, sponsored by the Southeast Chapter of the Society of Architectural Historians

“This book is extremely important and timely. The intelligence and seriousness with which it frames questions about taste and modernism will move the conversation forward. It is a game changer in both architectural history and design studies.”—Alice Friedman, Wellesley College

Monica Penick is assistant professor in the Design Studies Department at the University of Wisconsin–Madison.
Loading...
or
Not Currently Available for Direct Purchase