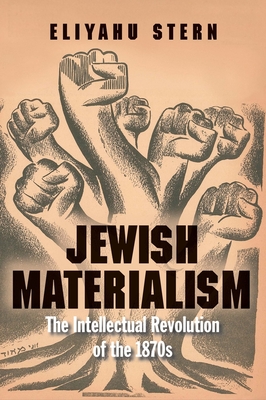 The Intellectual Revolution of the 1870s

A paradigm-shifting account of the modern Jewish experience, from one of the most creative young historians of his generation

To understand the organizing framework of modern Judaism, Eliyahu Stern believes that we should look deeper and farther than the Holocaust, the establishment of the State of Israel, and the influence and affluence of American Jewry. Against the revolutionary backdrop of mid-nineteenth-century Europe, Stern unearths the path that led a group of rabbis, scientists, communal leaders, and political upstarts to reconstruct the core tenets of Judaism and join the vanguard of twentieth-century revolutionary politics.

In the face of dire poverty and rampant anti-Semitism, they mobilized Judaism for projects directed at ensuring the fair and equal distribution of resources in society. Their program drew as much from the universalism of Karl Marx and Charles Darwin as from the messianism and utopianism of biblical and Kabbalistic works. Once described as a religion consisting of rituals, reason, and rabbinics, Judaism was now also rooted in land, labor, and bodies. Exhaustively researched, this original, revisionist account challenges our standard narratives of nationalism, secularization, and de-Judaization.

Eliyahu Stern is associate professor of modern Jewish intellectual and cultural history at Yale University. He is the author of The Genius: Elijah of Vilna and the Making of Modern Judaism and has served as a term member on the Council on Foreign Relations and a consultant to the Museum of the History of Polish Jews in Warsaw, Poland.

Praise For Jewish Materialism: The Intellectual Revolution of the 1870s…

“A model for the delineation of new cultural imaginaries and applies to other traditional identities as well.”—Choice
“Stern’s Jewish Materialism is a brilliant and deeply learned book. . . . In Jewish Materialism, Stern . . . makes major contributions to theories of Jewish modernization that, in turn, shed light on parallel developments around the globe.”—Nathaniel Deutsch, Journal of Interdisciplinary History
“With deep erudition and stunningly original analysis, Eliyahu Stern’s Jewish Materialism recovers a lost intellectual revolution to provocatively challenge the master narrative of modern Jewish politics."—James Loeffler, University of Virginia

"Earnest and erudite, Stern connects Jewish thought to Jewish experience. This fresh and innovative account of the materialism of the 1870s reveals common origins of later Jewish commitments to Zionism, socialism, and liberalism. Above all, it historicizes Jewish commitments to social justice."—Timothy Snyder, Yale University
“This is an outstanding and groundbreaking work which will alter our perception of nineteenth-century eastern European Jewry, the rise of Jewish nationalism and modern Judaism. This should be compulsory reading for anyone studying this period.”—Jonatan Meir, Ben-Gurion University of the Negev

"Stern specializes in eye opening! For all those assuming Judaism and materialism were on radically diverging paths in the world of 19th century Russian Jewry, this brilliant book will come as a salutary shock. It chronicles the countless ways in which writers and thinkers struggled to make religion and a realistic understanding of Jewish life come together. The dilemma elegantly set out by Stern has never really gone away, making the book timely in every possible sense."—Simon Schama

“Drawing on a wealth of untapped sources, Eliyahu Stern rescues a largely forgotten generation of Russian Jewish intellectuals who came of age in the 1870s. Reversing the age-old stigmatization of Jews as base materialists besotted by worldly riches, Stern’s fascinating history reveals the foundations for a robust secular Jewish identity in thetwenty-first century.”—Martin Jay, author of Reason after Its Eclipse: On Late Critical Theory