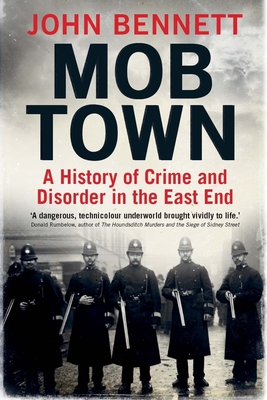 A History of Crime and Disorder in the East End

Even before Jack the Ripper haunted its streets for prey, London’s East End had earned a reputation for immorality, filth, and vice. John Bennett, a writer and tour guide who has walked and researched the area for more than thirty years, delves into four centuries of history to chronicle the crimes, their perpetrators, and the circumstances that made the East End an ideal breeding ground for illegal activity.

In the eighteenth and nineteenth centuries, Britain’s industrial boom drew thousands of workers to the area, leading to overcrowding and squalor. But crime in the area flourished long past the Victorian period. Drawing on original archival history and featuring a fascinating cast of characters including the infamous Ripper, highwayman Dick Turpin, the Kray brothers, and a host of ordinary evildoers, this gripping and deliciously unsavory volume will fascinate Londonphiles and true crime lovers alike.

John Bennett is the author of numerous books, including The Complete and Essential Jack the Ripper and Krayology. He lives in Middlesex, UK.
Loading...
or
Not Currently Available for Direct Purchase