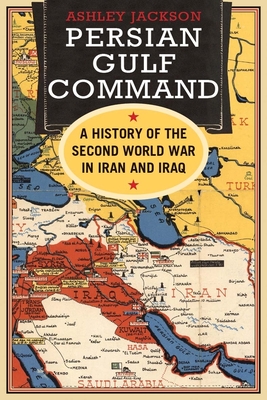 A History of the Second World War in Iran and Iraq

A new history of the long-overlooked WWII theater in Iran and Iraq, its unrecognized significance, and its impact on local society and politics

This dynamic history is the first to construct a total picture of the experience and impact of World War II in Iran and Iraq. Contending that these two countries were more important to the Allied forces’ war operations than has ever been acknowledged, historian Ashley Jackson investigates the grand strategy of the Allies and their operations in the region and the continuing legacy of Western intervention in the Middle East.

Iran and Iraq served as the first WWII theater in which the U.S., the U.K., and the U.S.S.R. fought alongside each other. Jackson charts the intense Allied military activity in Iran and Iraq and reveals how deeply the war impacted common people’s lives. He also provides revelations about the true nature of Anglo-American relations in the region, the beginnings of the Cold War, and the continuing corrosive legacy of Western influence in these lands.

Praise For Persian Gulf Command: A History of the Second World War in Iran and Iraq…

“Assiduously researched and sensitively written, Persian Gulf Command offers us a fascinating new perspective on the Second World War - its impact on local societies in the Middle East and the paths to post-war intervention by the West.”—Richard J. Aldrich, author of The Black Door

“A brilliant book that confirms Ashley Jackson’s place among the preeminent scholars of the British empire. Deeply researched, comprehensive and incisive, it is the must-read account of Britain’s Second World War in Iran and Iraq and its enduring consequences.”—Joe Maiolo, author of Cry Havoc

“Consistently fascinating and thought-provoking… Iran and Iraq always struggle to gain centre stage in existing histories of the Second World War, yet they were not secondary theatres for those who lived or fought there. Ashley Jackson puts them unapologetically in the limelight.”—Simon Ball, author of The Bitter Sea

"In this lucid work, filled with telling details and well-crafted arguments, Jackson has finally revealed the undoubted significance of Iran and Iraq to the wider war."—Niall Barr, author of  Eisenhower's Armies

Ashley Jackson is professor of imperial and military history, King’s College, London, and visiting fellow at Kellogg College, Oxford. He has published extensively on the British Empire in times of war. He lives in Oxfordshire, UK.
Loading...
or
Not Currently Available for Direct Purchase