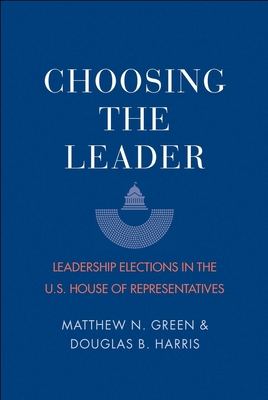 Leadership Elections in the U.S. House of Representatives

How are congressional party leaders chosen? In the first comprehensive study since Robert Peabody’s classic Leadership in Congress, political scientists Matthew Green and Douglas Harris draw on newly collected data about U.S. House members who have sought leadership positions from the 1960s to the present—data including whip tallies, public and private vote commitments, interviews, and media accounts—to provide new insights into how the selection process truly works.

Elections for congressional party leaders are conventionally seen as a function of either legislators’ ideological preferences or factors too idiosyncratic to permit systematic analysis. Analyzing six decades’ worth of information, Harris and Green find evidence for a new comprehensive model of vote choice in House leadership elections that incorporates both legislators’ goals and their connections with leadership candidates. This study will stand for years to come as the definitive treatment of a crucial aspect of American politics.

Praise For Choosing the Leader: Leadership Elections in the U.S. House of Representatives…

“Choosing the Leader achieves what it sets out to do: it is now the authoritative study of leadership elections in the House of Representatives.”—J. Heyrman, Choice
“Choosing the Leader raises important questions about the relationship. . . between candidates’ motivations to run for leadership posts and the quality of their tenure in office. . . . [An] engaging study.”—Ruth Bloch Rubin, The Forum
"Choosing the Leader makes a strong case for reconsidering our assumptions about House leadership races. It presents a parsimonious and novel theory, and its narratives allow the reader to ‘see’ the politics within the statistics. Choosing the Leader should be of interest to anyone hoping to better understand leadership selection, such as political junkies, scholars, staffers, and aspiring party leaders alike."—Matthew T. Harrigan, Congress & the Presidency
"Green and Harris present the best analysis of congressional leadership selection ever written. This book deserves to be read by every congressional scholar."— Benjamin Ginsberg, David Bernstein Professor of Political Science, Johns Hopkins University
"How have Gerald Ford, Newt Gingrich, Nancy Pelosi, and others come to lead their parties in Congress? These are among the nation's major elections. This book is the definitive analysis of the question."—David R. Mayhew, Sterling Professor of Political Science Emeritus, Yale University