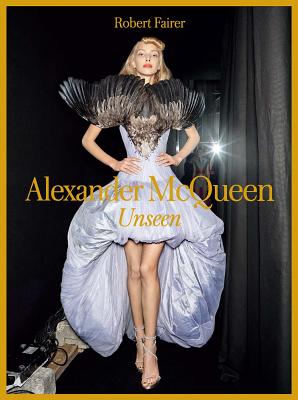 Alexander McQueen, the iconic designer whose untimely death in 2010 left the fashion world reeling and fans worldwide clamoring for more, fused immense creativity, audacity, and a hauntingly dark aesthetic sense into powerful, unforgettable imagery.  The strange, singular beauty of his clothing was matched by the spectacle of his legendary fashion shows, which demonstrated his outstanding showmanship and consistently pushed the boundaries of runway events.  Robert Fairer’s intimate, vibrant full-color photographs of McQueen’s collections, taken backstage and on the catwalk when few photographers were allowed access, offer a unique insight into the life and work of one of the world’s most captivating figures.

This previously unpublished portfolio of stunning, high-energy photographs captures the people and the spirit that made the designer’s flamboyant shows unique. Fairer, Vogue's backstage fashion photographer for over a decade, was an integral part of the whirl of activity behind the scenes.  These images, which capture both the glamor and the grit, represent a new genre of fashion photography and are a treasure-trove of inspiration. This superb book contains an introduction and collections texts by fashion expert Claire Wilcox. Dynamic images of McQueen’s collections--thirty of his total of thirty-six shows are presented chronologically--portray behind-the-scenes moments that reveal stylists, models, hairdressers, makeup artists, and McQueen himself at their most candid and creative.

"An intimate meditation on the final years of the fashion show in the pre-digital age."—Vanity Fair UK
"Robert Fairer offers an unseen look at Alexander McQueen."—Julia Vitale, Vanity Fair
"A behind-the-scenes take on the industry’s last great showman, Robert Fairer’s Alexander McQueen: Unseen, with text by Claire Wilcox and Vogue’s Sally Singer, is just the thing for a fashionphile."—Meghan O’Grady, Vogue
"This luxe catalog honors the designer—who died in 2010—with great photos from his fashion shows."—Tina Jordan, Entertainment Weekly
"An encyclopedic behind-the-scenes look at 30 of the designer’s 36 collections. From Shalom Harlow rotating and being sprayed with car paint by robots in the No. 13 show in 1998 to McQueen helping to carry off the stage a model acting like an exhausted endurance dancer in the ‘Deliverance’ show, Fairer captured it all."—Rosemary Feitelberg, WWD
"Robert’s images are just as much a window into a world of fashion journalism that's all but disappeared. . . . Fairer was one of the genre's pioneers, one of the first to slip away from the catwalk ruckus and behind the curtain; and few designers provided such a vein of activity to mine backstage as [Alexander McQueen]. . . . As much as he was the master of the big visual spectacle, he was also a master of detail. Robert’s images document the preparation and staggering visual shocks that Lee created, but they also show the designer putting final touches to looks before they went out on the catwalk, losing himself in the intricacy of his creations."—Felix Petty, i-D.vice.com
"Alexander McQueen: Unseen is a must for those who revel in the glories of fashion and those who possess indescribable abilities that allow them to translate those talents into tangible objects. The book is a reminder to all of those in fashion what a loss we suffered and will offer the uninitiated reader a glimpse into a world that was and dwindles each new season."—Jeffrey Felner, New York Journal of Books
"Marvel over Fairer’s vibrant and luxurious photographs of McQueen’s imaginative collections, taken on the runway and backstage where few have access. Alexander McQueen: Unseen offers a glimpse into the life and work of one of the world’s most intriguing and iconic fashion designers."—Tara Paniogue, Los Angeles Times
Named One of the Fall’s 10 Best Books on Fashion—W Magazine
"Robert’s images capture the raw energy and powerful emotion in those moments leading up to Lee’s incredible shows. The intensity and focus, the stress and excitement are all palpable. They trigger such vivid and fond memories."—Sarah Burton, Creative Director of Alexander McQueen

Robert Fairer was American Vogue’s exclusive backstage photographer for over a decade; his work has appeared in Elle, Harper’s Bazaar, GQ, and the New York Times, among many other publications. Sally Singer is creative director of Vogue.com. Claire Wilcox is senior curator at the V&A, London, and an expert on the work of Alexander McQueen.
Loading...
or support indie stores by buying on