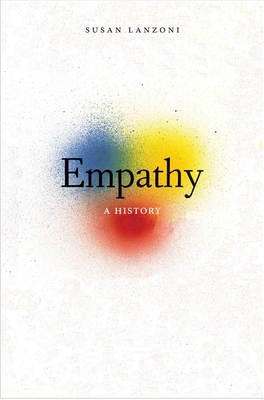 Empathy: A History tells the fascinating and largely unknown story of the first appearance of empathy in 1908 and tracks its shifting meanings over the following century. Despite the word’s ubiquity today, few realize that it began as a translation of Einfühlung (“in‑feeling”), a term in German psychological aesthetics that described how spectators projected their own feelings and movements into objects of art and nature.

Remarkably, this early conception of empathy transformed into its opposite over the ensuing decades. Social scientists and clinical psychologists refashioned empathy to require the deliberate putting aside of one’s feelings to more accurately understand another’s. By the end of World War II, interpersonal empathy entered the mainstream, appearing in advice columns, popular radio and TV, and later in public forums on civil rights. Even as neuroscientists continue to map the brain correlates of empathy, its many dimensions still elude strict scientific description.

This meticulously researched book uncovers empathy’s historical layers, offering a rich portrait of the tension between the reach of one’s own imagination and the realities of others’ experiences.

Praise For Empathy: A History…

Winner of the 2020 Cheiron Book Prize, sponsored by The International Society for the History of Behavioral and Social Sciences

“Susan Lanzoni reveals the little-known roots and reach of 'empathy,' particularly its richness as a lens on the arts. An eye-opener for anyone with an interest in empathy, particularly those in the behavioral and brain sciences, whose understanding of the concept will be expanded in astonishing ways.”—Daniel Goleman, author of Emotional Intelligence

“Highly impressive…. this lucid and generously case-based book gave me a distinctly different understanding of empathy and its role in scientific explorations, like emotion theory and neuron research, as well as in everyday social relations.”—Jill Morawski, Wesleyan University


“Susan Lanzoni’s dive into the history and use of empathy – in aesthetics, ethics, politics and now neurobiology – has produced a book that is both deep and wide.  Few concepts have exerted such power.  This is a crucial study, now more than ever.”—Peter Galison, Harvard University

Susan Lanzoni is a historian of psychology, psychiatry, and neuroscience. She teaches at Harvard University’s School of Continuing Education. Her work has been featured in TheAtlantic and American Scientist, and on Cognoscenti from WBUR, Boston’s NPR station.
Loading...
or
Not Currently Available for Direct Purchase