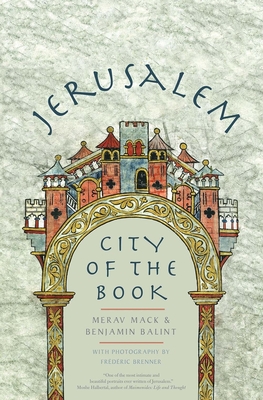 City of the Book

A captivating journey through the hidden libraries of Jerusalem, where some of the world’s most enduring ideas were put into words

In this enthralling book, Merav Mack and Benjamin Balint explore Jerusalem’s libraries to tell the story of this city as a place where some of the world’s most enduring ideas were put into words. The writers of Jerusalem, although renowned the world over, are not usually thought of as a distinct school; their stories as Jerusalemites have never before been woven into a single narrative. Nor have the stories of the custodians, past and present, who safeguard Jerusalem’s literary legacies.

By showing how Jerusalem has been imagined by its writers and shelved by its librarians, Mack and Balint tell the untold history of how the peoples of the book have populated the city with texts. In their hands, Jerusalem itself—perched between East and West, antiquity and modernity, violence and piety—comes alive as a kind of labyrinthine library.

Praise For Jerusalem: City of the Book…

"A good gift for arm-chair traveler and ardent bibliophile who appreciates books and libraries."—Association of Jewish Libraries News and Reviews

"Mack and Balint accompany the reader on an intricate guided tour through Jerusalem’s written treasures and the journey is both enlightening and fascinating. . . . This scholarly yet accessible book will provide Jerusalem enthusiasts with a different side of the city; it makes acces­si­ble pre­vi­ous­ly hid­den gems and show­cas­es a deep respect for the preser­va­tion of the writ­ten word."—Jewish Book Council

"The Jerusalem of reality, as Merav Mack and Benjamin Balint in their mesmerizing narrative, is every bit as vivid as that of the imagination, often even surpassing it. . . . Mack and Balint clearly relished the task, and they transmit that relish to the reader. . . . Intriguing issues emerge at every turn in this book. What has Jerusalem signified, to whom, and why?"—Lewis Glinert, New Criterion

"A sensitive travelogue . . . Mack and Balint’s book is eminently readable, full of lovely descriptions and evocative writing, fluid and discursive in equal measures. . . . A handsome and gripping Baedeker."—Jordan Finkin, H-Judaic

“An unforgettable journey through the world of books in Jerusalem, and an unparalleled portrait of one of the world’s great cities.”—Matti Friedman, author of The Aleppo Codex

“For those who love Jerusalem, Jerusalem: City of the Book will be a welcome treat. But all those interested in what religions share, and how they may co-exist, will also learn a great deal from this lively, and often surprising book.”—Miri Rubin, Queen Mary University of London

“Traveling across Jerusalem and beyond, two humanist flâneurs find shame and pride, secrecy and sacredness, and a palimpsest made of innumerable religious and secular texts and libraries. A wonderfully wondrous journey.”—Cyrus Schayegh, author of The Middle East and the Making of the Modern World

“In their exquisite and brilliant exploration of the intricacies of Jerusalem’s libraries, Merav Mack and Benjamin Balint provide us with one of the most intimate and beautiful portraits ever written of Jerusalem. In unraveling the written treasures of Jerusalem, the overlapping maps of the sacred of the three Abrahamic religions unfold before our eyes, constituting Jerusalem as a simultaneous space of sublimity, rivalry, rupture and return.”—Moshe Halbertal, author of Maimonides: Life and Thought

“A marvelous book which brings alive the history over many centuries of Jerusalem’s books, libraries, and the librarians who have been—and still are—their guardians. Sensitively and thoughtfully making links between the contested and controversial past and the present, the authors illuminate how books and libraries can bridge divides and shape the future.”—David Bates, former Director of the Institute of Historical Research in the University of London

Merav Mack is a historian and scholar of contemporary religion affiliated with the Harry S. Truman Research Institute at the Hebrew University of Jerusalem and the German Protestant Institute for Archaeology at Augusta Victoria. Her current research focuses on Christian minorities in the Middle East. Benjamin Balint is a writer and translator based at the Van Leer Institute in Jerusalem. His previous books include Running Commentary and Kafka’s Last Trial.
Loading...
or
Not Currently Available for Direct Purchase