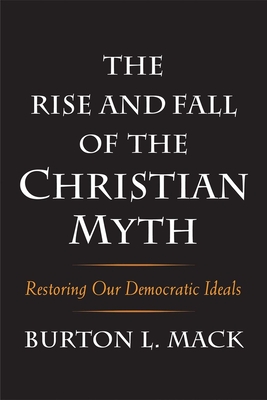 The Rise and Fall of the Christian Myth

A preeminent scholar explores the evolution of the Christian worldview and argues that it no longer offers a satisfactory vision for our democratic, multicultural society

This book is the culmination of a lifelong scholarly inquiry into Christian history, religion as a social institution, and the role of myth in the history of religions. Mack shows that religions are essentially mythological and that Christianity in particular has been an ever-changing mythological engine of social formation, from Roman times to its distinct American expression in our time.

The author traces the cultural influence of the Christian myth that has persisted for sixteen hundred years but now should be much less consequential in our social and cultural life, since it runs counter to our democratic ideals. We stand at a critical impasse: badly splintered by conflicting groups pursuing their own social interests, a binding common myth needs to be established by renewing a truly cohesive national and international story rooted in our democratic and egalitarian origins, committed to freedom, equality, and vital human values.

Praise For The Rise and Fall of the Christian Myth: Restoring Our Democratic Ideals…

"Intellectually exciting and socially important, full of energy and exceedingly generative on one of the most important issues of our time."—Jennifer Michael Hecht, author of Doubt: A History

“Mack has done what no one else has dared to: He has drawn the big picture of Christian myth and its out-workings in the social imagination and mentalities of the West down to the contemporary USA.”—Stanley Stowers, Brown University

"A must for anyone attempting to understand our changing world."—Randall Reed, Appalachian State University

"This book takes its place among the best examples of cultural criticism, exposing what goes without saying in U.S. discourse and practice and daring to imagine a saner society and safer world.”—Merrill P. Miller, University of North Carolina at Pembroke
— Merrill P. Miller

“Mack explores the Christian myth and model of empire, finding it inappropriate for the 21st Century. By deftly painting the big picture of a common-good reconfiguration of American society, he challenges us to re-imagine our future—together.”— Rev. Dr. Natalie K. Houghtby-Haddon, The George Washington University Center for Excellence in Public Leadership

Burton L. Mack is Wesley Professor Emeritus of Early Christianity at Claremont School of Theology. Pioneering the study of Christian Origins, his nine books include The Lost Gospel.
Loading...
or
Not Currently Available for Direct Purchase