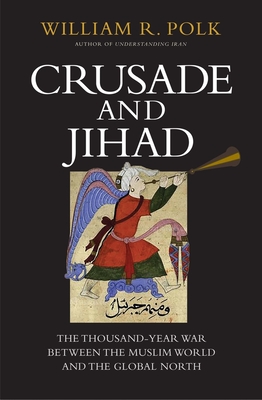 The Thousand-Year War Between the Muslim World and the Global North (The Henry L. Stimson Lectures Series)

What really happened in the centuries of conflict between Europe, Russia, China, America, and the peoples of the Muslim world

Crusade and Jihad is the first book to encompass, in one volume, the entire history of the catastrophic encounter between the Global North—China, Russia, Europe, Britain, and America—and Muslim societies from Central Asia to West Africa. William R. Polk draws on more than half a century of experience as a historian, policy planner, diplomat, peace negotiator, and businessman to explain the deep hostilities between the Muslim world and the Global North and show how they grew over the centuries.

Polk shows how Islam arose and spread across North Africa into Europe, climaxed in the vibrant and sophisticated caliphate of al-Andalus in medieval Spain, and was the bright light in a European Dark Age. Simultaneously, Islam spread from the Middle East into Africa, India, and Southeast Asia. But following the Mongol invasions, Islamic civilization entered a decline while Europe began its overseas expansion. Portuguese buccaneers dominated the Indian Ocean; the Dutch and the English established powerful corporations that turned India and Indonesia into colonies; Russian armies pushed down the Volga into Central Asia, destroying its city-states; and the Chinese Qing dynasty slaughtered an entire Central Asian people. Britain crushed local industry and drained off wealth throughout its vast colonies. Defeated at every turn, Muslims tried adopting Western dress, organizing Westernstyle armies, and embracing Western ideas.

None of these efforts stopped the conquests. For Europe and Russia, the nineteenth century was an age of colonial expansion, but for the Muslim world it was an age of brutal and humiliating defeat. Millions were driven from their homes, starved, or killed, and their culture and religion came under a century-long assault.

In the twentieth century, brutalized and and disorganized native societies, even after winning independence, fell victim to “post-imperial malaise,” typified by native tyrannies, corruption, and massive poverty. The result was a furious blowback.

A sobering, scrupulous, and frank account of imperialism, colonialism, insurgency, and terrorism, Crusade and Jihad is history for anyone who wishes to understand the civilizational conflicts of today’s world.

William R. Polk taught Arabic literature and history at Harvard University and the University of Chicago, served on the Policy Planning Council under President Kennedy, negotiated the Egyptian-Israeli Suez ceasefire, and founded the Adlai Stevenson Institute of International Affairs. He has written nineteen books.

Praise For Crusade and Jihad: The Thousand-Year War Between the Muslim World and the Global North (The Henry L. Stimson Lectures Series)…

“Crusade and Jihad is a challenging and interesting book, well written and provocative.”—Hugh Kennedy, Literary Review

"Polk harnesses decades worth of research, teaching, government service, and travel to explain what Islam is, how it has interacted with the non-Muslim world, and what the Muslim reaction to imperialism has been, covering the seventh century to the present day. . . . Recommended."—Choice

"In this magisterial treatment, William Polk cuts to the core of contemporary conflicts with the Muslim world, providing an accessible, often troubling account."—Joel Gordon,University of Arkansas, author of Nasser: Hero of the Arab Nation
“A tour de force covering centuries of history from the perspective of the people who lived in the Muslim world, Crusade and Jihad offers a fresh and urgently needed angle on the present crisis in the Middle East that you will find nowhere else.”—Ilan Pappe, author of The Forgotten Palestinians: A History of the Palestinians in Israel
“William Polk combines analytical powers and profound insight with a lively, accessible style. Crusade and Jihad is a pleasure for the mind.”—Uri Avnery, author and peace activist
"With rigor and sympathy, William Polk has produced a masterpiece to enlighten us all. No one who reads Crusade and Jihad will put it down without an increased knowledge and understanding of the crucial relationship between the Islamic and Western worlds."— Charles Glass, author of Tribes with Flags and Syria Burning: A Short History of a Catastrophe

“A brilliant study, analytical and authoritative. There are few overviews that can rival the depth and the range of this work.”— K.N. Chaudhuri, FBA Emeritus Professor of The History of European Expansion, European University, Florence, Italy