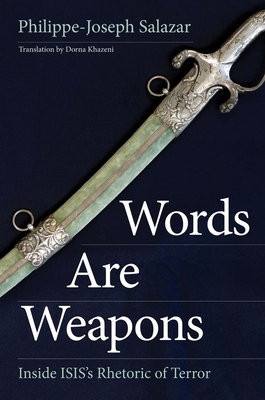 Inside ISIS’s Rhetoric of Terror

The first book to offer a rigorous, sophisticated analysis of ISIS’s rhetoric and why it is so persuasive

ISIS wages war not only on the battlefield but also online and in the media. Through a close examination of the words and images ISIS uses, with particular attention to the “digital caliphate” on the web, Philippe-Joseph Salazar theorizes an aesthetic of ISIS and its self-presentation. As a philosopher and historian of ideas, well versed in both the Western and the Islamic traditions, Salazar posits an interpretation of Islam that places speech—the profession of faith—at the center of devotion and argues that evocation of the simple yet profound utterance of faith is what gives power to the rhetoric that ISIS and others employ. At the same time, Salazar contends that Western discourse has undergone a “rhetorical disarmament.” To win the fight against ISIS and Islamic extremism, Western democracies, their media, politicians, and counterterrorism agencies must consider radically changing their approach to Islamic extremism.


Praise For Words Are Weapons: Inside ISIS’s Rhetoric of Terror…

“The puzzle is that although democratic states are the core agents controlling [the] exposure of information, there seems to be no end to people ready to join terrorist groups like ISIS. This puzzle is addressed brilliantly by Philippe Joseph Salazar in [Words Are Weapons], which gives arguments that rupture the conventional understanding of ISIS.”—Stanzin Lhaskyabs, Reading Religion

"Words Are Weapons is an exemplar of rhetoric’s power to capture minds and incapacitate civilization. Its many-layered analysis of ISIS’s thuggish rhetoric offers no paeans to Western reason as its antidote. Instead, it explores the full palate of the Caliphate’s rhetorical power to mobilize an aesthetic of populist virility and strength that promises conquest of moral injustice committed by apostates against Islam. At a time when there is blowback to calling out nasty rhetoric for what it is, Salazar’s exposé of Western failure to match ISIS’s appeal offers a cautionary tale for the consequences of mincing words."—Gerard A. Hauser, Arts & Sciences Professor Emeritus of Distinction, University of Colorado Boulder

"Words Are Weapons illuminates the Caliphate’s rhetorical power, showing us Westerners all the ways we do not understand, let alone appreciate, the persuasive oratory of jihadism. We fail to understand the logical-rhetorical-poetic continuum of spoken power, the singular focus on obedience, and the analogical reasoning that leads to deadly judgment. Philippe-Joseph Salazar brilliantly explicates the deeply religious roots of the Islamic State and why worldly Westerners are the targets of terrorism. He then moves into cogent directives for how we might best confront, even overpower, the Caliphate. A significant work of rhetorical scholarship, Words Are Weapons is highly readable and well timed."—Cheryl Glenn, University Distinguished Professor, Penn State University

“Salazar declares that the liberal democracies must admit to how their discursive habits are liabilities in the global struggle with radical Islam. Even so, instead of using the usual clichés about civilization and barbarism, he argues for understanding. Instead of laying out a rhetoric of crisis management, he offers a style of writing that prompts more questions than answers, and replaces certitude with discernment.”—Robert Hariman, Northwestern University


"Salazar' s book is unique in its careful grasp of extreme Islamic propaganda as a global rhetoric of multipronged reach, and it helps us to understand how the electronic age may well be our own ethical undoing in the face of new totalitarianisms."--Barbara Cassin, author of Nostalgia: When Are We Ever At Home?

"A much-needed, profoundly original examination of the language and media use of the Caliphate [in which] key concepts from rhetorical studies and argumentation are present and put to good use."—Edward Schiappa, John E. Burchard Professor of Humanities, Massachusetts Institute of Technology

Philippe-Joseph Salazar is Distinguished Professor of Rhetoric in the Faculty of Law at the University of Cape Town and past Director in Rhetoric and Democracy at the Collège International de Philosophie in Paris. In 2008 he received the Harry Oppenheimer Fellowship Award, the top prize for research on the African continent. In 2015 he received the Prix Bristol des Lumières for the French edition of this book. Dorna Khazeni was a finalist for the PEN USA Translation Award. She has published her translations from French in Vanity Fair, Harper’s, Zoetrope AllStory, The Believer, and elsewhere.
Loading...
or
Not Currently Available for Direct Purchase