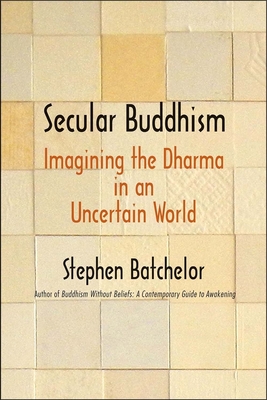 Imagining the Dharma in an Uncertain World

As the practice of mindfulness permeates mainstream Western culture, more and more people are engaging in a traditional form of Buddhist meditation. However, many of these people have little interest in the religious aspects of Buddhism, and the practice occurs within secular contexts such as hospitals, schools, and the workplace. Is it possible to recover from the Buddhist teachings a vision of human flourishing that is secular rather than religious without compromising the integrity of the tradition? Is there an ethical framework that can underpin and contextualize these practices in a rapidly changing world?

In this collected volume of Stephen Batchelor’s writings on these themes, the author explores the complex implications of Buddhism’s secularization. Ranging widely—from reincarnation, religious belief, and agnosticism to the role of the arts in Buddhist practice—he offers a detailed picture of contemporary Buddhism and its attempt to find a voice in the modern world.

Praise For Secular Buddhism: Imagining the Dharma in an Uncertain World…

"Batchelor’s work will undoubtedly appeal to many 'spiritual, but not religious' readers."—Publishers Weekly

“A thoughtful, conversational, and accessible volume.”—Choice

“This wide-ranging anthology will appeal to anyone interested in exploring Buddhism within a framework that is both conversant with and challenging to a Western intellectual heritage.”—Library Journal (a Best Book of 2017 choice, Religion & Spirituality category)

"What Batchelor calls 'secular Buddhism' or 'Buddhism 2.0' is a delicate balancing act. . . . Batchelor’s reimagination is Janus-faced, simultaneously looking backward and forward. On the one hand, if it loses sight of the past, it risks losing the capacity of 'Buddhism' to challenge and transform contemporary culture . . . On the other hand, if it does not look forward, the Dharma becomes confused with the cultural and metaphysical beliefs and strategies of long-gone ages. . . . This Janus-faced stance is a new manifestation of the Buddhist Middle Way, negotiating what remains powerful, even revolutionary, in the tradition, while creatively transforming it to resonate not only in new cultural soil, but also to be able to respond to contemporary exigencies."—Jason M. Wirth, Los Angeles Review of Books


"Brilliant, illuminating, and thought-provoking, After Buddhism deserves the ultimate compliment for a work of this kind: it is useful. In probing the ancient scriptures in search of a Buddha we can relate to, Batchelor makes his dharma come thrillingly alive. A masterful achievement."—Mark Epstein, author of Thoughts without a Thinker

"In this remarkable book, Stephen Batchelor transcends Buddhist dogma to surface a vision of the dharma that goes right to the heart of our contemporary global culture. Through diligent scholarship and years of practice, the author sheds new and revelatory light on the dharma. This is a must-read for all students of Buddhism."—Joan Halifax, Abbot, Upaya Zen Center

"With exemplary lucidity, Stephen Batchelor demonstrates the relevance of an ancient thought and practice in our own era. There is much in it that illuminates and clarifies—for those acquainted with Buddhism as well as those coming to it for the first time."—Pankaj Mishra

"An audacious disquisition on Buddhism, universal dharma, reality, and suffering for the 21st century. Batchelor posits that for the deep wisdom of Buddhism to serve humanity fully in our time, it may have to transcend itself."—Jon Kabat-Zinn, author of Full Catastrophe Living and Coming to Our Senses

Stephen Batchelor is a teacher and scholar of Buddhism. He trained as a monk for ten years in traditional Buddhist communities and now presents a secular approach to Buddhist practice. The author of the bestselling Buddhism without Beliefs, he lives near Bordeaux, France.
Loading...
or
Not Currently Available for Direct Purchase