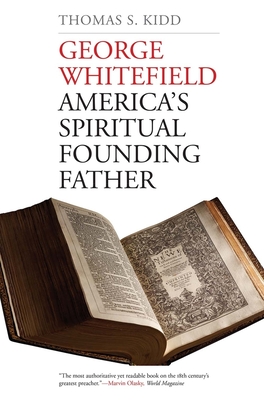 An engaging, balanced, and penetrating narrative biography of the charismatic eighteenth-century American evangelist

In the years prior to the American Revolution, George Whitefield was the most famous man in the colonies. Thomas Kidd’s fascinating new biography explores the extraordinary career of the most influential figure in the first generation of Anglo-American evangelical Christianity, examining his sometimes troubling stands on the pressing issues of the day, both secular and spiritual, and his relationships with such famous contemporaries as Benjamin Franklin, Jonathan Edwards, and John Wesley.

Based on the author’s comprehensive studies of Whitefield’s original sermons, journals, and letters, this excellent history chronicles the phenomenal rise of the trailblazer of the Great Awakening. Whitefield’s leadership role among the new evangelicals of the eighteenth century and his many religious disputes are meticulously covered, as are his major legacies and the permanent marks he left on evangelical Christian faith. It is arguably the most balanced biography to date of a controversial religious leader who, though relatively unknown three hundred years after his birth, was a true giant in his day and remains an important figure in America’s history.

"Kidd, a professor of history at Baylor and an evangelical Christian, balances his admiration for Whitefield with scholarly rigor. . . . Kidd’s theologically sympathetic approach gives the book a depth that a more detached treatment might not: He misses none of the biblical allusions that peppered Whitefield’s utterances, and he is an excellent guide through the tangled doctrinal controversies that dogged Whitefield’s career. . . . A great orator keeps his listeners’ attention fixed on himself. What made Whitefield great was his ability to keep it fixed on Another."—Barton Swaim, Wall Street Journal

"A popularly accessible biography of a legendary Calvinist preacher. . . . A warts-and-all portrait of the man [and] a concise and entertaining read."—David Wilezol, Washington Times

"A remarkably thorough and even-handed biography, beautifully structured from a wealth of primary sources to form the best, most insightful biography of Whitefield ever written."—Steve Donoghue, Open Letters Monthly

"A narrative that sympathetically helps readers understand what motivated Whitefield’s indefatigable preaching of the gospel while setting the flawed itinerant in his context. . . . To help us understand Whitefield, Kidd constantly connects him to larger movements—not least of which is the burgeoning evangelical movement of the day. And he does all of this in an engaging manner, using vibrant prose, good storytelling techniques, and incisive historical commentary."—David Barshinger, ExploringChurchHistory.com

"The most authoritative yet readable book on the 18th century’s greatest preacher."—Marvin Olasky, World Magazine

"This new biography recalls George Whitefield, the 18th-century English evangelist, as probably the most recognizable celebrity of his age. He was certainly the most traveled, crisscrossing the Atlantic countless times and preaching to audiences, sometimes in the tens of thousands, up and down the Atlantic seaboard and throughout the British Isles. . . . George Whitefield indelibly shaped America, the Anglosphere, the surging global evangelical movement—and modern notions of celebrity."—Mark Tooley, Weekly Standard

"Thomas Kidd brings a unique set of gifts to this new biography. He is, first of all, a scholar. Accuracy and balance mark his careful writing. But Kidd is not interested in writing just for other scholars. . . . The book is based on extensive research, but it’s also a book the non-specialist can enjoy. We are never left is the dust of academic jargon or historical detail. . . . If you only read one biography this year, make it this one—and if you don’t have a biography of George Whitefield on your shelf, buy this one. . . . I see Whitefield the man more clearly and realistically now, but I also see Whitefield the passionate evangelist more clearly."—Douglas Connelly, Englewood Review of Books

"This is by far the best biography that exists on Whitefield. The author, Kidd, blends perfectly history and interpretation in an extremely engaging way. I literally couldn’t put this book down. Get it. Get it now."—Luke Geraty, ThinkTheology.org

"It is a gift to the scholarly community that we have a full and straightforward scholarly biography, and it is a gift to the evangelical community that a historian of Kidd’s caliber treats Whitefield so seriously and respectfully. The result is something everyone should celebrate: a careful presentation of a sinful saint who forever changed the face of American evangelicalism."—Justin Taylor, Books & Culture

"In his new biography of Whitefield, Thomas Kidd attempts to restore him to his proper place as America’s foremost early Evangelical, providing a clear-eyed yet sympathetic portrait in the process. . . . Drawing on both his Christian and academic sensibilities, Kidd reports both Whitefield’s serious failures and lasting achievements. Today’s evangelicals would do well to sort through his legacy and learn."—Bria Sandford, First Things

"In this reader-friendly biography, Thomas S. Kidd provides a comprehensive examination of the life and influence of arguably the most influential public figure in English-speaking history. . . . Kidd's writing is engaging, precise, and articulate, as well as adequately footnoted with a bibliographic treasury that other scholars of Whitefield and American religion will find invaluable."—Jerome Dean Mahaffey, Journal of American History

"This excellently crafted new biography of the noted 18th century evangelist George Whitefield . . . will be invaluable for many years to come as a standard biography and trustworthy work on Whitefield."—Jack C. Whytock, Haddington House Journal 2016

"[George Whitefield] should satisfy Kidd’s fellow evangelicals seeking to understand a figure central to the origins of their own faith community as well as academic readers hoping to place Whitefield in his context."—Carla Gardina Pestana, Wesley and Methodist Studies

"[Kidd] synthesizes other secondary works, along with Whitefield’s journals and letters, into a compelling account of the revivalist’s spiritual life and preaching on conversion."—Mark Valeri, Journal of Religion

"This superb chronicle of George Whitefield’s life is now our fullest biography for the much-studied and much-debated eighteenth-century evangelist. It combines unusual empathy with unusual comprehension."—Mark Noll, author of The Rise of Evangelicalism: The Age of Edwards, Whitefield and the Wesleys

"George Whitefield: America’s Spiritual Founding Father traces the life of perhaps the most important evangelical leader in American history, the minister most responsible for the rise of the evangelical movement in the decades before the American Revolution. Thomas Kidd introduces us to a flawed but deeply religious man whose passionate preaching inspired thousands of Americans to become evangelical Christians. Lucid, well-researched, and insightful, this book is an absorbing account of Whitefield’s remarkable life and ministry."—Catherine Brekus, author of Sarah Osborn's World: The Rise of Evangelical Christianity in Early America

"Thomas Kidd’s judicious portrait places Whitefield at the center of the transatlantic evangelical awakening, where he belongs."—Bruce Hindmarsh, author of The Evangelical Conversion Narrative: Spiritual Autobiography in Early Modern England

"Thoroughly researched, and rooted in an exact knowledge of Whitefield’s times; critically perceptive while remaining appreciatively sympathetic; this is the best balanced and most illuminating chronicle of the Anglo-American Awakener’s career that has yet been produced."­—J.I. Packer, Professor of Theology, Regent College

"I commend this book to any serious student of American history. British by birth, George Whitefield is in fact woven into the spiritual fabric of our own nation—he was a central figure in the Great Awakening of the early American colonies, his rousing sermons and booming voice stirring thousands. He truly is, in the words of Kidd, 'America’s Spiritual Founding Father.'"—Frank Wolf, Congressman of the 10th District of Virginia

Thomas S. Kidd is distinguished professor of history at Baylor University. He lives in Waco, TX.
Loading...
or support indie stores by buying on
(This book is on backorder)