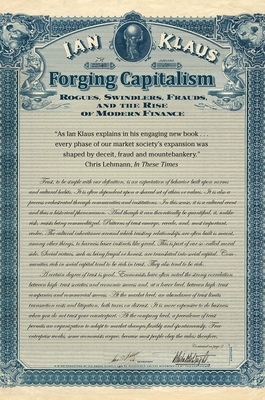 Rogues, Swindlers, Frauds, and the Rise of Modern Finance (Yale Series in Economic and Financial History)

Vice is endemic to Western capitalism, according to this fascinating, wildly entertaining, often startling history of modern finance. Ian Klaus’s Forging Capitalism demonstrates how international financial affairs in the nineteenth century were conducted not only by gentlemen as a noble pursuit but also by connivers, thieves, swindlers, and frauds who believed that no risk was too great and no scheme too outrageous if the monetary reward was substantial enough. Taken together, the grand deceptions of the ambitious schemers and the determined efforts to guard against them have been instrumental in creating the financial establishments of today. In a story teeming with playboys and scoundrels and rich in colorful and amazing events, Klaus chronicles the evolution of trust through three distinct epochs: the age of values, the age of networks and reputations, and, ultimately, in a world of increased technology and wealth, the age of skepticism and verification. In today’s world, where the questionable dealings of large international financial institutions are continually in the spotlight, this extraordinary history has great relevance, offering essential lessons in both the importance and the limitations of trust.

Ian Klaus is a member of the Policy Planning Staff of the U.S. State Department and was previously Ernest May Fellow at the John F. Kennedy School of Government at Harvard University.
Loading...
or
Not Currently Available for Direct Purchase