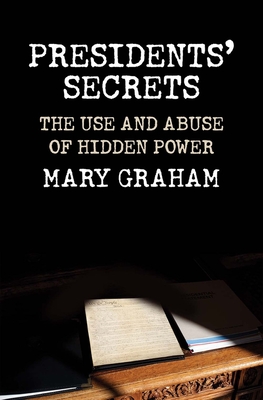 The Use and Abuse of Hidden Power

How presidents use secrecy to protect the nation, foster diplomacy, and gain power

Ever since the nation’s most important secret meeting—the Constitutional Convention—presidents have struggled to balance open, accountable government with necessary secrecy in military affairs and negotiations. For the first one hundred and twenty years, a culture of open government persisted, but new threats and technology have long since shattered the old bargains. Today, presidents neither protect vital information nor provide the open debate Americans expect.

Mary Graham tracks the rise in governmental secrecy that began with surveillance and loyalty programs during Woodrow Wilson’s administration, explores how it developed during the Cold War, and analyzes efforts to reform the secrecy apparatus and restore oversight in the 1970s. Chronicling the expansion of presidential secrecy in the Bush years, Graham explains what presidents and the American people can learn from earlier crises, why the attempts of Congress to rein in stealth activities don’t work, and why presidents cannot hide actions that affect citizens’ rights and values.

Praise For Presidents’ Secrets: The Use and Abuse of Hidden Power…

“This is a timely, readable account of the management, and more often mismanagement, of secrecy by US presidents from Washington to Obama. Mary Graham . . . brings passion, first-hand knowledge and a sense of history to the subject.”—David C. Unger, Survival

"Presidents from George Washington through Barack Obama have struggled to balance the citizens' right to know versus the government's need for secrecy. In Presidents' Secrets, Mary Graham tells this fascinating story from Washington's remarkably modern-sounding explosion about unauthorized leaks at the Constitutional Convention to the novel challenges posed by the Cold War and the new technology."—Mike Kinsley, Vanity Fair columnist

"Presidents’ Secrets is a work of scholarly merit and depth told deftly with rich narrative and compelling detail. Graham provides an historical context against a dramatic background. The portrayals of presidential decision-making bring with them an intimacy that elevates the book well above and beyond the usual wonkish  treatments—and does so without compromising scholarship. A splendid piece of work."—Ted Gup, professor, journalist, and author of Nation of Secrets: The Threat to Democracy and the American Way of Life

"Presidents’ Secrets brilliantly illuminates an issue as alive today as it was for George Washington—but with global consequences more ominous now: how much presidential secrecy can our democratic freedoms tolerate? Brisk, compact and readable, it describes the major secrecy battle presidents have fought, including Obama, and would be invaluable reading for the new administration."—Robert MacNeil, journalist and author

Mary Graham codirects the Transparency Policy Project at the Harvard Kennedy School of Government and is the author of three earlier books on the politics of information. She has written for the Atlantic,Science, and other publications.
Loading...
or
Not Currently Available for Direct Purchase