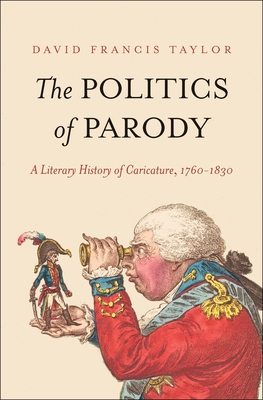 The Politics of Parody

A Literary History of Caricature, 1760-1830 (The Lewis Walpole Series in Eighteenth-Century Culture and History)

This engaging study explores how the works of Shakespeare, Milton, Swift, and others were taken up by caricaturists as a means of helping the eighteenth-century British public make sense of political issues, outrages, and personalities. The first in-depth exploration of the relationship between literature and visual satire in this period, David Taylor’s book explores how great texts, seen through the lens of visual parody, shape how we understand the political world. It offers a fascinating, novel approach to literary history.

Praise For The Politics of Parody: A Literary History of Caricature, 1760-1830 (The Lewis Walpole Series in Eighteenth-Century Culture and History)…


"Taylor has written the most historically-detailed and theoretically-sophisticated account we have of the interactions between Georgian graphic satire and the literary canon. This is exhilarating, original, powerful scholarship, as illuminating about Macbeth or Paradise Lost or Gulliver's Travels as it is about the caricatures that so vigorously seized upon and re-shaped them."— David Womersley, University of Oxford


"An innovative account of Romantic-period graphic satire that brilliantly demonstrates the openness of visual culture to literary analysis. The golden age of caricature has never looked so rich or creative."—Thomas Keymer, University of Toronto

"Contesting the notion of Georgian caricature as a popular cultural form, David Frances Taylor masterfully disentangles visual satire’s negotiation of the boundaries between an educated elite and those less able to interpret its literary and political allusions. The graphic satires yield to his exhaustive analysis to reveal a rich context of allusion and parody encompassing Shakespeare, Milton, Bunyan, Swift, and Napoleon. Brimming over with fresh insights and appealing to a broadly interdisciplinary audience, The Politics of Parody will forever change the way we see these fascinating prints."—Felicity Nussbaum, Distinguished Research Professor, UCLA

"The Politics of Parody is a fascinating and authoritative study that brings together Taylor's deep knowledge of the golden-age of caricature with his expertise on politics and the theatre to marvelous effect. It is unsurpassed in its field."—Jon Mee, Print, Publicity, and Popular Radicalism in the 1790s

"No one has explored the visual and verbal cultures of the afterlives of eighteenth-century literature quite as systematically and insightfully as Taylor. He is unique in doing justice to the intertextuality—and intermediality—of this era of cultural history.”—Deidre Lynch, Harvard University

David Francis Taylor is associate professor of eighteenth‑century literature at the University of Warwick, and the award‑winning author of Theatres of Opposition: Empire, Revolution, and Richard Brinsley Sheridan.
Loading...
or
Not Currently Available for Direct Purchase