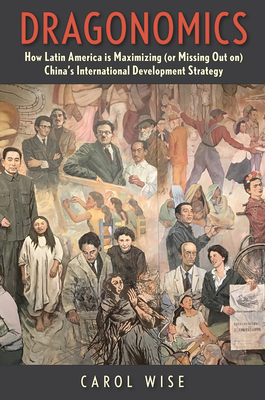 This book explores the impact of Chinese growth on Latin America since the early 2000s. Some twenty years ago, Chinese entrepreneurs headed to the Western Hemisphere in search of profits and commodities, specifically those that China lacked and that some Latin American countries held in abundance—copper, iron ore, crude oil, and soybeans. Focusing largely on Argentina, Brazil, Chile, Costa Rica, Mexico, and Peru, Carol Wise traces the evolution of political and economic ties between China and these countries and analyzes how success has varied by sector, project, and country. She also assesses the costs and benefits of Latin America’s recent pivot toward Asia. Wise argues that while opportunities for closer economic integration with China are seemingly infinite, so are the risks. She contends that the best outcomes have stemmed from endeavors where the rule of law, regulatory oversight, and a clear strategy exist on the Latin American side.


Praise For Dragonomics: How Latin America Is Maximizing (or Missing Out on) China's International Development Strategy…

Winner of the Phi Kappa Phi Award for Best Social Science Faculty Book of the Year, sponsored by the University of Southern California

“Paraphrasing a well-known adage, life is not what happens to you, but what you do with what happens.The question is not how did China’s rise impact Latin America, but how did Latin America play its cards during China’s rise. Some did well in spite of their small size. Others did very poorly, including my own country. This book is a must-read for anybody interested in making the most out of the rise of China.”—Ricardo Hausmann, Kennedy School of Government, Harvard University

“Distinguished expert on Latin American development Carol Wise’s timely new book explains how some of China’s Latin American partners shaped the China boom to their benefit, while others are floundering in the wake of this global shift. Dragonomics is an essential and highly readable guide to the political economy of these dramatic changes.”—Deborah Brautigam, author of The Dragon’s Gift: The Real Story of China in Africa

“Dragonomics not only draws much-needed attention to the massive shadow China casts over Latin America, but also skillfully shows the critical role political institutions at the national level continue to play in determining whether and how countries benefit from China’s insatiable demand for commodities.”—Geoffrey M. Garrett, Dean of The Wharton School

“Drawing on years of field research, Wise helps us to make sense of China´s evolving role in this region, and to understand how some countries have taken better advantage of it than others. Dragonomics makes an outstanding, accessible contribution to our comprehension of China–Latin America relations and will appeal to journalists, investors, activists, and students of all fields.” —Cynthia A. Sanborn, Universidad del Pacífico


“Dragonomics marks the arrival of the next generation of China-Latin America studies. The book offers an original assessment of how Latin America might make the most of—rather than simply react to—China’s presence in the region.”— Monica DeHart, University of Puget Sound

Carol Wise is professor of international relations at the University of Southern California, where she focuses on international political economy with an emphasis on Latin America and Pacific Asia.
Loading...
or
Not Currently Available for Direct Purchase