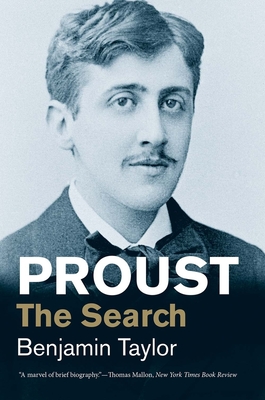 An arresting new study of the life, times, and achievement of one of the most influential writers of the twentieth century

“Taylor’s endeavor is not to explain the life by the novel or the novel by the life but to show how different events, different emotional upheavals, fired Proust’s imagination and, albeit sometimes completely transformed, appeared in his work. The result is a very subtle, thought-provoking book.”—Anka Muhlstein, author of Balzac’s Omelette and Monsieur Proust’s Library

Marcel Proust came into his own as a novelist comparatively late in life, yet only Shakespeare, Balzac, Dickens, Tolstoy, and Dostoyevsky were his equals when it came to creating characters as memorably human. As biographer Benjamin Taylor suggests, Proust was a literary lightweight before writing his multivolume masterwork In Search of Lost Time, but following a series of momentous historical and personal events, he became—against all expectations—one of the greatest writers of his, and indeed any, era.

This insightful, beautifully written biography examines Proust’s artistic struggles—the “search” of the subtitle—and stunning metamorphosis in the context of his times. Taylor provides an in-depth study of the author’s life while exploring how Proust’s personal correspondence and published works were greatly informed by his mother’s Judaism, his homosexuality, and such dramatic events as the Dreyfus Affair and, above all, World War I. As Taylor writes in his prologue, “Proust’s Search is the most encyclopedic of novels, encompassing the essentials of human nature. . . . His account, running from the early years of the Third Republic to the aftermath of World War I, becomes the inclusive story of all lives, a colossal mimesis. To read the entire Search is to find oneself transfigured and victorious at journey’s end, at home in time and in eternity too.”

"This engaging book, invitingly elegant to handle with it’s beautiful deckle-edged pages, should encourage those who have quailed at the thought of Proust’s colossus to have another go."—John Carey, Sunday Times

"Benjamin Taylor’s Proust: The Search is a marvel of brief biography, reanimating the hapless, almost Chaplinesque figure who by all logic should never have accomplished what he did. With a kind of worldly tenderness, Taylor shows Proust’s work accruing amid personal pratfalls, French anti-Semitism and the catastrophe of World War I."—Thomas Mallon, New York Times Book Review

"Taylor’s loose, multi-clausal sentences are as bendy as the master’s, and there is the same shimmery quality to the prose, like sunlight glancing off a shallow Normandy sea."—Kathryn Hughes, Guardian

"An important contribution to the study of this complex individual . . . A riveting summary of the rampant anti-Semitism found in late 19th-century France . . . . Excellent analysis of the Dreyfus affair and how it split French society . . . . A noteworthy biography of a great writer."—Library Journal

"A sensitive study of literature's favorite neurasthenic. . . . Readers of Proust will be fascinated to find clues as to who his characters were in real life, and they should be moved to appreciation by Taylor's assessment of Proust's accomplishment . . . A densely packed and rewarding book."—Kirkus Reviews

"Taylor expertly deconstructs where the similarities between Proust's fictional self and real-life self begin and end . . . . A deep analysis of Proust's masterpiece and a biography of Proust the man, Taylor proves, are one and the same."—Shelf Awareness

"Those who found reading Proust too grand an undertaking over the years because of distractions and deficiencies of their own, might well rush to reconsider after confronting this dazzlingly elegant biography."—Philip Roth

"Taylor’s endeavor is not to explain the life by the novel or the novel by the life but to show how different events, different emotional upheavals, fired Proust’s imagination and, albeit sometimes completely transformed, appeared in his work. The result is a very subtle, thought-provoking book."—Anka Muhlstein, author of Balzac’s Omelette and Monsieur Proust’s Library

Benjamin Taylor is a founding member of the Graduate Writing Program faculty at the New School and the author or editor of six previous books, including The Book of Getting Even and Saul Bellow: Letters.
Loading...
or support indie stores by buying on
(This book is on backorder)