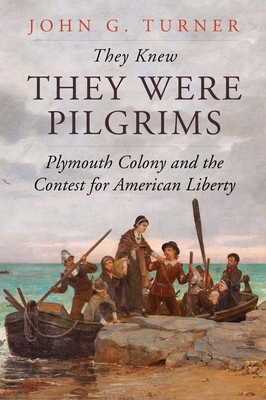 They Knew They Were Pilgrims

Plymouth Colony and the Contest for American Liberty

Published for the 400th anniversary of the Mayflower's landing, this ambitious new history of the Pilgrims and Plymouth Colony "will become the new standard work on the Plymouth Colony.” (Thomas Kidd)
"Informative, accessible, and compelling. . . . A welcome invitation to rediscover the Mayflower voyage and the founding of Plymouth Colony."—Daniel M. Gullotta, Christianity Today

"[An] excellent new history. . . .  [Turner] asserts that the Pilgrims matter for more than their legend, and he deftly uses the history of Plymouth to explore ideas of liberty in the American colonies."—Nathanael Blake, National Review
In 1620, separatists from the Church of England set sail across the Atlantic aboard the Mayflower. Understanding themselves as spiritual pilgrims, they left to preserve their liberty to worship God in accordance with their understanding of the Bible.

There exists, however, an alternative, more dispiriting version of their story. In it, the Pilgrims are religious zealots who persecuted dissenters and decimated Native peoples through warfare and by stealing their land. The Pilgrims’ definition of liberty was, in practice, very narrow.

Drawing on original research using underutilized sources, John G. Turner moves beyond these familiar narratives in his sweeping and authoritative new history of Plymouth Colony. Instead of depicting the Pilgrims as otherworldly saints or extraordinary sinners, he tells how a variety of English settlers and Native peoples engaged in a contest for the meaning of American liberty.


Praise For They Knew They Were Pilgrims: Plymouth Colony and the Contest for American Liberty…

"They Knew They Were Pilgrims tells this story anew through an even-keeled and extensive history."—James Panero, New Criterion Critic's Notebook

"[An] excellent new history of the colony. . . . While validating some criticisms, [Turner] asserts that the Pilgrims matter for more than their legend, and he deftly uses the history of Plymouth to explore ideas of liberty in the American colonies."—Nathanael Blake, National Review

"Informative, accessible, and compelling, They Knew They Were Pilgrims is a welcome invitation to rediscover the Mayflower voyage and the founding of Plymouth Colony at a distance of four centuries."—Daniel N. Gulotta, Christianity Today

“[Turner's] close attention to detail . . . distinguishes his work and makes it an important addition to the literature of colonial New England.”—Julie Anne Sweet, Journal of Church and State

Received the CT Award of Merit for the history/ biography category, sponsored by Christianity Today

Finalist for the 2020 TGC History Book Prize, sponsored by The Gospel Coalition

“This highly important book will become the new standard work on the Plymouth Colony.”—Thomas Kidd, author of Who Is an Evangelical?

“They Knew They were Pilgrims is a deeply-researched must-read for anyone interested in the Pilgrims and in the history of 17th-century Plymouth Colony.”—Michael P. Winship, author of Hot Protestants

“This is ‘Pilgrim’ history from start to finish—all the way from the stirrings of ‘separatism’ in late sixteenth-century England to the absorbing of Plymouth Colony into Massachusetts in 1691. Told with unusual lucidity, Turner’s narrative avoids the myths of the Pilgrims as founders of our democracy or ‘Congregationalism.’”—David D. Hall, author of The Puritans: A Transatlantic History

“Turner takes readers deep into the complex world the Pilgrims inhabited, giving an old familiar story remarkable new life and power. The story he tells is at once entertaining, erudite, and wonderfully human.”—Margaret Bendroth, author of The Last Puritans

John G. Turner is professor of religious studies at George Mason University and the award-winning author of Brigham Young: Pioneer Prophet.
Loading...
or
Not Currently Available for Direct Purchase