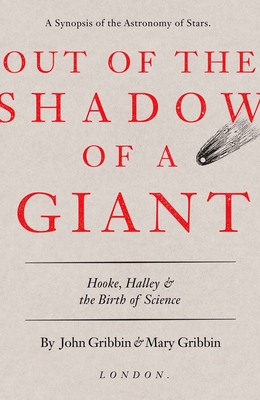 Out of the Shadow of a Giant

Hooke, Halley, and the Birth of Science

What if Newton had never lived? A compelling dual biography argues that Robert Hooke and Edmond Halley easily could have filled the giant’s shoes—and deserve credit for the birth of modern science.

Robert Hooke and Edmond Halley, whose place in history has been overshadowed by the giant figure of Newton, were pioneering scientists within their own right, and instrumental in establishing the Royal Society.

Although Newton is widely regarded as one of the greatest scientists of all time and the father of the English scientific revolution, John and Mary Gribbin uncover the fascinating story of Robert Hooke and Edmond Halley, whose scientific achievements neatly embrace the hundred years or so during which science as we know it became established. They argue persuasively that, even without Newton, science would have made a great leap forward in the second half of the seventeenth century, headed by two extraordinary figures, Hooke and Halley.

Praise For Out of the Shadow of a Giant: Hooke, Halley, and the Birth of Science…

“A well-documented argument that [Newton] owed more to the ideas of others than he admitted.”—Kirkus Reviews

“Science readers will thank the Gribbins for restoring Hooke and Halley to the prominence that they deserve.”—Publishers Weekly

“Engaging. . . . They offer proof that Hooke was an important scientist in his own right, and often had physical insights that were borrowed (usually without acknowledgement) by Newton.”—Choice

Praise for 13.8: The Quest to Find the True Age of the Universe and the Theory of Everything:
“Gribbin is a confident, engaging guide . . . a lovingly rendered history.”—Joshua Sokol, The Wall Street Journal

John Gribbin is the author of many best-selling books, including In Search of Schrödinger’s Cat. Mary Gribbin is a teacher and science writer, and previous winner of the TES Junior Information Book Award. John and Mary are both Visiting Fellows at the University of Sussex.
Loading...
or support indie stores by buying on