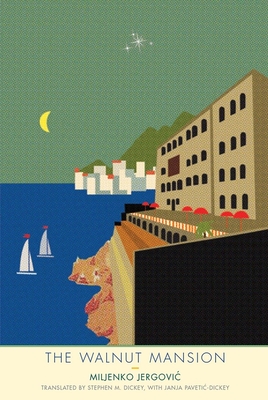 The Walnut Mansion (The Margellos World Republic of Letters)

An epic novel of twentieth-century Balkan life, from the decline of the Ottoman Empire through the bloodshed of the Bosnian War

This grand novel encompasses nearly all of Yugoslavia’s tumultuous twentieth century, from the decline of the Austro-Hungarian and Ottoman Empires through two world wars, the rise and fall of communism, the breakup of the nation, and the terror of the shelling of Dubrovnik. Tackling universal themes on a human scale, master storyteller Miljenko Jergovic traces one Yugoslavian family’s tale as history irresistibly casts the fates of five generations.

What is it to live a life whose circumstances are driven by history? Jergovic investigates the experiences of a compelling heroine, Regina Delavale, and her many family members and neighbors. Telling Regina’s story in reverse chronology, the author proceeds from her final days in 2002 to her birth in 1905, encountering along the way such traumas as atrocities committed by Nazi Ustashe Croats and the death of Tito. Lyrically written and unhesitatingly told, The Walnut Mansion may be read as an allegory of the tragedy of Yugoslavia’s tormented twentieth century.

Croatian writer Miljenko Jergovic is a leading author in the region of former Yugoslavia and the recipient of numerous national and international awards. He lives in Zagreb, Croatia. Stephen M. Dickey is associate professor in the Slavic languages and literatures department, University of Kansas. Janja Pavetic-Dickey, a native of Croatia, served as staff translator and interpreter at the UN War Crimes Tribunal in The Hague.
Loading...
or
Not Currently Available for Direct Purchase