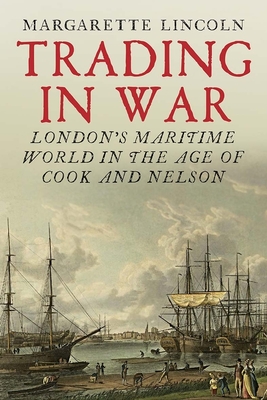 London's Maritime World in the Age of Cook and Nelson

In the half-century before the Battle of Trafalgar the port of London became the commercial nexus of a global empire and launch pad of Britain’s military campaigns in North America and Napoleonic Europe. The unruly riverside parishes east of the Tower seethed with life, a crowded, cosmopolitan, and incendiary mix of sailors, soldiers, traders, and the network of ordinary citizens that served them. Harnessing little-known archival and archaeological sources, Lincoln recovers a forgotten maritime world. Her gripping narrative highlights the pervasive impact of war, which brought violence, smuggling, pilfering from ships on the river, and a susceptibility to subversive political ideas. It also commemorates the working maritime community: shipwrights and those who built London’s first docks, wives who coped while husbands were at sea, and early trade unions. This meticulously researched work reveals the lives of ordinary Londoners behind the unstoppable rise of Britain’s sea power and its eventual defeat of Napoleon.

Margarette Lincoln was director of research and collections and, from 2001, deputy director of the National Maritime Museum, Greenwich. She is now a visiting fellow at Goldsmiths, University of London. She lives in London.

Praise For Trading in War: London's Maritime World in the Age of Cook and Nelson…

“This book inexorably ties the lives of citizens to the life of the port, and you will never see London in the same light. It is enlightening, well-written, gripping and down-to-earth. This is a must-read for anyone whose ancestors lived in not just London but any busy port during the 18th century, by an author who really knows her stuff.”
—Janet Dempsey, Who Do You Think You Are

“Trading in War is one of the rare books that integrates social and economic history . . . Essential.”—Choice
“Sophisticated analysis, fine writing, and an impressive control of relevant source materials.”—Gordon Bannerman, Michigan War Studies Review
“Trading in War contributes greatly to the historical literature on maritime London by unearthing the lives of those who contributed to the successes, failures, and transformations in meeting the demands of global economy and empire.”—John R. Burrow, H-Net Reviews

Winner of the Outstanding Academic Title for 2018 award sponsored by Choice
"This is a vivid evocation of the riverside life of eighteenth-century London, with sailors and landmen, rich and poor, bankers, merchants, stevedores, wharfingers and boatmen living and working cheek by jowl in the middle of the biggest and busiest port in the world. Many have glanced at this lost world from a distance, but few can equal Margarette Lincoln's intimate knowledge of it."—N.A.M. Rodger, author of The Command of the Ocean

"A rich and vibrant study of the riverside boroughs of London to the east of Tower Bridge, the world's greatest maritime city, in an age of revolution and social change. Lincoln catches a transient world of moving people, changing work, and the integrated lives of sea captains and servants, shipwrights, stowaways and thieves."—Andrew Lambert, author of Nelson and War at Sea in the Age of Sail

"Written at a fine, taut pace, this account of the industrial and trading powerhouse of maritime London at the end of the eighteenth century demonstrates that living then was at times far from comfortable, even for those who prospered. This is a new and comprehensive social analysis, with wonderful stories taken from unusual sources. Here, too, is the underside of society, riot and murder, poverty and theft, alongside the economic vibrancy along the banks of the Thames, capitalists and workers taking advantage of the business stoked up by lengthy wars."—Roger Knight, author of Britain Against Napoleon
"A fascinating glimpse of a part of London that is so often overlooked. Margarette Lincoln takes us into the minutiae of the lives of ‘ordinary’ citizens, and shows how they are in fact far from ordinary: shipbuilders, sailors and explorers and many others who made Britain the leading maritime nation of the period. And even more remarkable, we get to know the women of this watery world, often the unsung heroines in turbulent times."—Margaret Willes, author of The Curious World of Samuel Pepys and John Evelyn