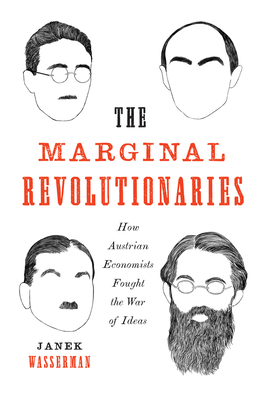 How Austrian Economists Fought the War of Ideas

A group history of the Austrian School of Economics, from the coffeehouses of imperial Vienna to the modern-day Tea Party

The Austrian School of Economics—a movement that has had a vast impact on economics, politics, and society, especially among the American right—is poorly understood by supporters and detractors alike. Defining themselves in opposition to the mainstream, economists such as Ludwig von Mises, Friedrich Hayek, and Joseph Schumpeter built the School's international reputation with their work on business cycles and monetary theory. Their focus on individualism—and deep antipathy toward socialism—ultimately won them a devoted audience among the upper echelons of business and government.

In this collective biography, Janek Wasserman brings these figures to life, showing that in order to make sense of the Austrians and their continued influence, one must understand the backdrop against which their philosophy was formed—notably, the collapse of the Austro‑Hungarian Empire and a half‑century of war and exile.

Praise For The Marginal Revolutionaries: How Austrian Economists Fought the War of Ideas…

“A fair-minded, deeply researched account of how a school of thought developed and wielded influence . . . quite well done, and full of fascinating stories.”—Justin Fox, New York Times Book Review

“The book is a fair- minded, deeply researched account of how a school of thought developed and wielded influence”— Justin Fox, International New York Times

“[A] book that no one interested in the interrelationships between Austrian economics and the renaissance of liberal thought can afford to disregard”—Hansjörg Klausinger, Contemporary Austrian Studies

“Wasserman’s masterful book paints a much needed critical yet scholarly picture of the Austrian School...Unlike many of the accounts written by  people personally connected to the School, he brings attention to these thinkers’ privileged backgrounds and lifestyles, their fundamentally elitist politics, and the important connections to wealthy benefactors with clear political agendas.”—Ola Innset, Erasmus Journal for Philosophy and Economics

Winner of the Joseph Spengler Best Book Prize, sponsored by the History of Economics Society

“This is a vital book for our times. Janek Wasserman’s study is learned and accessible, demystifying and elegant; above all, it corrects popular misconceptions about the origins and legacies of Austrian economics.”—Jeremy Adelman, Princeton University

“Over more than a hundred years, the Austrian School of Economics was born, emigrated, split, revived and transformed. Janek Wasserman has done the impossible, producing a readable guide to the whole story while shirking none of the school’s complexity. A serious achievement.”—Quinn Slobodian, author of Globalists: The End of Empire and the Birth of Neoliberalism

“Janek Wasserman deftly traces the filiation of Austrian economic ideas from the café culture of pre-war Vienna to the online universe of the contemporary alt-right.  The result is a stimulating history of economists such as Mises and Hayek, and their influence on our era. Well-written, compelling, and entirely accessible, this book deserves a broad readership.”—Robert Leonard, Université du Québec à Montréal

“[ . . . ] Wasserman has succeeded in providing a rich and worthwhile overview of Austrian economics.”—D. Mitch, University of Maryland Baltimore County

Janek Wasserman is associate professor at the University of Alabama. He is the author of Black Vienna: The Radical Right in the Red City, 1918–1938.
Loading...
or support indie stores by buying on