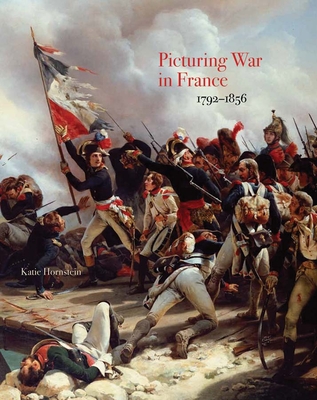 From the walls of the Salon to the pages of weekly newspapers, war imagery was immensely popular in postrevolutionary France. This fascinating book studies representations of contemporary conflict in the first half of the 19th century and explores how these pictures provided citizens with an imaginative stake in wars being waged in their name. As she traces the evolution of images of war from a visual form that had previously been intended for mostly elite audiences to one that was enjoyed by a much broader public over the course of the 19th century, Katie Hornstein carefully considers the influence of emergent technologies and popular media, such as lithography, photography, and panoramas, on both artistic style and public taste. With close readings and handsome reproductions in various media, from monumental battle paintings to popular prints, Picturing War in France,1792–1856 draws on contemporary art criticism, war reporting, and the burgeoning illustrated press to reveal the crucial role such images played in shaping modern understandings of conflict.

“Hornstein’s methodology, groundbreaking research, wealth of documentation, and visual model make this book an innovative work that will be vital as a study reference. It also provides rich insight into the transformations that occurred in French society in the first half of the nineteenth century.” —Camilla Murgia, caa.reviews
“Hornstein respects the complexity of her subject, and the result is a deeply fascinating book.”—David O’Brien, Nineteenth-Century Art Worldwide
“While the intellectual content of the book is clearly aimed at professional specialists in art history, the clarity of expression renders the work quite accessible to a broad readership, from professional scholars to advanced undergraduates. This wide appeal makes Hornstein’s study a worthy addition to the reading list of any educated reader with an interest in art, war, and society.”—Christopher Coski, French Review
"[Hornstein] weaves thorough historical context with art analysis in a way that solidifies her argument that art history as a discipline benefits from examining these elements of visual culture that have too often been ignored."—Marina Ortiz, Nineteenth-Century French Studies
“This exciting and ambitious study offers a major contribution to an expanded history of nineteenth-century French art, in which Hornstein demonstrates that depictions of war represented a vital and immensely—perhaps uniquely—popular form of image making.”—Sarah Betzer, University of Virginia
“A compelling account of the complex relations between diverse images of conflict in a time of rapid social, political, and aesthetic change.”—Richard Taws, University College London