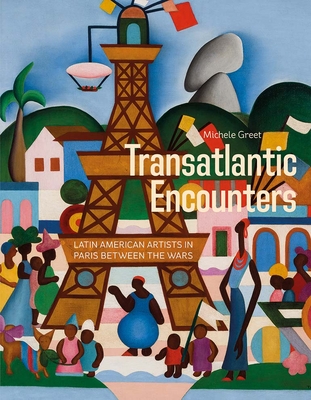 Latin American Artists in Paris Between the Wars

Paris was the artistic capital of the world in the 1920s and ’30s, providing a home and community for the French and international avant-garde, whose experiments laid the groundwork for artistic production throughout the rest of the century. Latin American artists contributed to and reinterpreted nearly every major modernist movement that took place in the creative center of Paris between World War I and World War II, including Cubism (Diego Rivera), Surrealism (Antonio Berni and Roberto Matta), and Constructivism (Joaquín Torres-García). Yet their participation in the Paris art scene has remained largely overlooked until now. This vibrant book examines their collective role, surveying the work of both household names and an extraordinary array of lesser-known artists.

Author Michele Greet illuminates the significant ways in which Latin American expatriates helped establish modernism and, conversely, how a Parisian environment influenced the development of Latin American artistic identity. These artists, hailing from former Spanish and Portuguese colonies, encountered expectations of primitivism from their European audiences, and their diverse responses to such biased perceptions—ranging from rejection to embrace to selective reinterpretation of European tendencies—yielded a rich variety of formal innovation. Magnificently illustrated and conveying with clarity a nuanced portrait of modernism, Transatlantic Encounters also engages in a wider discussion of the relationship between displacement, identity formation, and artistic production.

Praise For Transatlantic Encounters: Latin American Artists in Paris Between the Wars…

“A nuanced and well-illustrated history of Latin American artists in interwar Paris . . . A timely survey.”—Michele Jennings, ARLIS/NA Reviews
Winner of the Outstanding Academic Title for 2018 award sponsored by Choice

Given honorable mention for the 2019 Best Book in Latin American Visual Culture Studies award, sponsored by the Latin American Studies Association
“This book will change the way we understand both Latin American and Parisian modernist art, especially during the inter-war period when so much was at stake in artistic, social, and political terms.”—Leonard Folgarait, Vanderbilt University
“This book goes beyond the study of Latin American art to become a must-read for anyone interested in modern art in the first half of the twentieth century.”—Katherine Manthorne, author of California Mexicana: Missions to Murals, 1820 to 1930