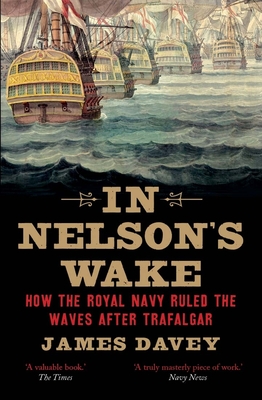 The Navy and the Napoleonic Wars

Horatio Nelson’s celebrated victory over the French at the Battle of Trafalgar in 1805 presented Britain with an unprecedented command of the seas. Yet the Royal Navy’s role in the struggle against Napoleonic France was far from over. This groundbreaking book asserts that, contrary to the accepted notion that the Battle of Trafalgar essentially completed the Navy’s task, the war at sea actually intensified over the next decade, ceasing only with Napoleon’s final surrender.

In this dramatic account of naval contributions between 1803 and 1815, James Davey offers original and exciting insights into the Napoleonic wars and Britain’s maritime history. Encompassing Trafalgar, the Peninsular War, the War of 1812, the final campaign against Napoleon, and many lesser known but likewise crucial moments, the book sheds light on the experiences of individuals high and low, from admiral and captain to sailor and cabin boy. The cast of characters also includes others from across Britain—dockyard workers, politicians, civilians—who made fundamental contributions to the war effort, and in so doing, both saved the nation and shaped Britain’s history.

James Davey is curator of naval history at the National Maritime Museum, Greenwich. He lives in Greenwich, London.
Loading...
or
Not Currently Available for Direct Purchase