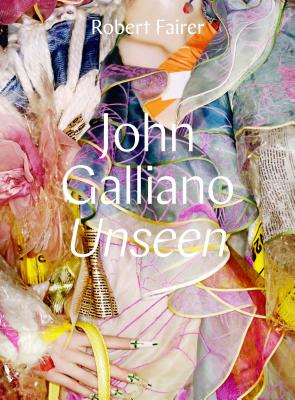 A striking, sumptuous portfolio of catwalk and behind-the-scene images of John Galliano’s highly creative collections for his eponymous label

John Galliano’s (b. 1960) ascent in the world of fashion design was swift and filled with acclaim for his bold, quick-witted sensibility and his theatrical flair. He became head designer for Givenchy in 1995, and then for Christian Dior in 1996, and directed his own fashion label between 1996 and 2011. He was named Designer of the Year at the British Fashion Awards four times. Currently creative director of the Paris-based fashion house Maison Margiela, Galliano has fascinated the fashion world with his often outrageous and whimsical creations, including some of the most memorable collections of the 20th century: from the iconic Suzie Sphinx collection to luxurious and edgy reinventions of Chinese, Peruvian, Yemeni, or Mongolian costumes.

Unfolding chronologically with short texts by fashion expert Claire Wilcox introducing each collection, John Galliano: Unseen captures the designer’s mesmerizing creations for his eponymous label (including rich and idiosyncratic details) and the intense backstage work of Galliano’s trusted collaborators. Robert Fairer’s long stint as backstage photographer for Vogue gives him a unique perspective, and his exquisite photographs of Galliano’s collections, many of which are published here for the first time, offer insights into the extravagance and playfulness of one of the world’s most flamboyant, innovative, and controversial fashion designers at the zenith of his career.

Robert Fairer was American Vogue’s exclusive backstage photographer for over a decade. Claire Wilcox is senior curator of fashion at the Victoria and Albert Museum, London, and professor in fashion curation, London College of Fashion. André Leon Talley is the former editor-at-large for AmericanVogue.

“[A] book filled with whimsical, resplendent and bold images that most fashion aficionados would appreciate.”—The Los Angeles Times
“John Galliano: Unseen is a work that demands to be more closely examined; when read it will serve to remind the reader that fashion can be one of the most creative professions on earth.”—Jeffrey Felner, New York Journal of Books
“To read this book from start to finish is to enter an alternate universe: oversized, electric, a little demented, and unabashedly showy.  . . . is nirvana for fashionistas.”—Kirkus Reviews
“John Galliano: Unseen captures the lush, romantic genius of an iconic couturier . . . I suspect that for many who pick it up, this season-by-season look at Galliano’s collections from 1996 to 2011 will spark nostalgic gasps of recognition of a favored silhouette, an innovative cut or a sensual drape of cloth.”—Bill Daley, Chicago Tribune