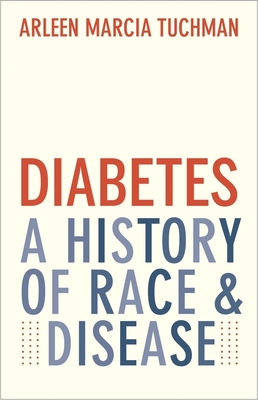 A History of Race and Disease

Who gets diabetes and why? An in‑depth examination of diabetes in the context of race, public health, class, and heredity

Who is considered most at risk for diabetes, and why? In this thorough, engaging book, historian Arleen Tuchman examines and critiques how these questions have been answered by both the public and medical communities for over a century in the United States.

Beginning in the late nineteenth century, Tuchman describes how at different times Jews, middle‑class whites, American Indians, African Americans, and Hispanic Americans have been labeled most at risk for developing diabetes, and that such claims have reflected and perpetuated troubling assumptions about race, ethnicity, and class. She describes how diabetes underwent a mid-century transformation in the public’s eye from being a disease of wealth and “civilization” to one of poverty and “primitive” populations.

In tracing this cultural history, Tuchman argues that shifting understandings of diabetes reveal just as much about scientific and medical beliefs as they do about the cultural, racial, and economic milieus of their time.

Praise For Diabetes: A History of Race and Disease…

“A well-researched, lucidly written, and often unnerving account of how doctors have explained [diabetes] down to the present day, often ignoring the science in favor of the prejudices and anxieties of their time . . .  [An] unsettling but insightful social history.”—Kirkus Reviews

Won the PROSE award, History of Science, Medicine, and Technologycategory, sponsored by the Association of American Publishers

“This is a superb, deeply researched history of the role of racism and class bias in perceptions of type 2 diabetes. Its root causes? Poverty and discrimination—a new vision for a prevention agenda.”—Marion Nestle, author of Food Politics

“This landmark study not only reveals the history of Type 2 diabetes, which may well become the most important disease of twenty-first century America, but also shows us how it has been associated with various ethnicities from the beginning of its recognition.”—Margaret Humphreys, author of Marrow of Tragedy: The Health Crisis of the American Civil War

“In this careful study of disease, difference, and disparity, Arleen Tuchman has made a lasting contribution to the histories of science, medicine, race, and racism, with broad implications for American history and public health policy writ large.”—Jeremy A. Greene, author of Prescribing by Numbers: Drugs and the Definition of Disease

“Meticulous, insightful research reveals diabetes to have become not one, but many diseases based on the perceived race, culture, and responsibility of sufferers, its innocent or guilty victims.”—Jacalyn Duffin, author of History Medicine: A Scandalously Short Introduction

“How did diabetes come to embody our nation’s socioeconomic divides? With compassion and acumen, Arleen Tuchman illuminates how diabetes morphed to mirror our nation’s racial stereotypes over the past century. This is an important book.”—Matthew Klingle, Bowdoin College

Arleen Marcia Tuchman is Nelson O. Tyrone Jr. Professor of History at Vanderbilt University specializing in the cultural history of medicine. She is the author of Science, Medicine, and the State in Germany and Science Has No Sex: The Life of Marie Zakrzewska, M.D.
Loading...
or support indie stores by buying on