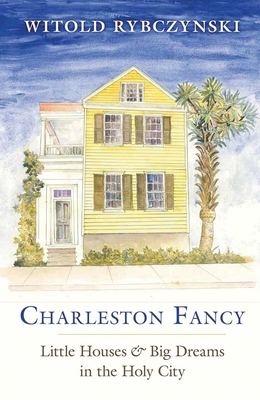 Little Houses and Big Dreams in the Holy City

A captivating chronicle of building in modern-day Charleston, making a case for architecture based on historical precedent, local context, and the ability to delight

Charleston, South Carolina, which boasts America’s first historic district, is known for its palmetto-lined streets and picturesque houses. The Holy City, named for its profusion of churches, exudes an irresistible charm. Award-winning author and cultural critic Witold Rybczynski unfolds a series of stories about a group of youthful architects, builders, and developers based in Charleston: a self-taught home builder, an Air Force pilot, a fledgling architect, and a bluegrass mandolin player.

Beginning in the 1980s, this cast of characters, exercising a kind of amateur mastery, produced an eclectic array of buildings inspired by the past—including a domed Byzantine drawing room, a fanciful medieval castle, a restored freedman’s cottage, a miniature Palladian villa, and a contemporary Mediterranean street. In his careful profiles of these protagonists and the challenges they have overcome in realizing their dreams, Rybczynski compellingly emphasizes the importance of architecture and urban design on a local level, how an old city can remake itself by invention as well as replication, and the role that individuals still play in transforming the urban landscapes around them.

Praise For Charleston Fancy: Little Houses and Big Dreams in the Holy City…

“It’s no surprise that architect and urbanist Witold Rybczynski fell under the spell of Charleston, S.C., one of the most beautiful cities in the United States. Nor is it a shocker that this prolific author was inspired to write a book about Charleston in an attempt to get at the heart of what makes it special. What is surprising, and pleasantly so, is the circuitous route he takes to get us there.”—Logan Ward, Wall Street Journal

“Rybczynski has a gift for seamlessly integrating history and theory into his books. In Charleston Fancy, we learn how the Holy City’s unique urban landscape came to be, and we also learn some of the history of Palladianism in colonial America. . . . The result is an enjoyable series of mini-lessons in history, urbanism, and aesthetics that go down as easily as cool summer cocktails on a Charleston piazza.”—James Ewing, New Criterion


“It is in the search for beauty, the careful execution of each detail, that the ensemble of her buildings creates a city that is admired and loved. Charleston Fancy teaches us this is still possible.”—Joseph P. Riley, Jr., Mayor of Charleston (1975–2016)

“In this engaging and fascinating account of development and urban conservation in and around Charleston, Rybczynski masterfully tells a series of interconnected stories that, like a complex Russian novel, involve a variety of characters, bound together by the place itself and its unique history and culture.”—Steven W. Semes, author of The Future of the Past

Witold Rybczynski is an architect and emeritus professor of urbanism at the University of Pennsylvania.
Loading...
or support indie stores by buying on