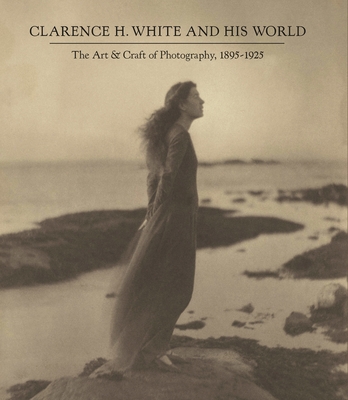 Clarence H. White and His World

Restoring a gifted art photographer to his place in the American canon and, in the process, reshaping and expanding our understanding of early 20th-century American photography

Clarence H. White (1871–1925) was one of the most influential art photographers and teachers of the early 20th century and a founding member of the Photo-Secession. This beautiful publication offers a new appraisal of White’s contributions, including his groundbreaking aesthetic experiments, his commitment to the ideals of American socialism, and his embrace of the expanding fields of photographic book and fashion illustration, celebrity portraiture, and advertising. Based on extensive archival research, the book challenges the idea of an abrupt rupture between prewar, soft-focus idealizing photography and postwar “modernism” to paint a more nuanced picture of American culture in the Progressive era.

Clarence H. White and His World begins with the artist’s early work in Ohio, which shares with the nascent Arts and Crafts movement the advocacy of hand production, closeness to nature, and the simple life. White’s involvement with the Photo-Secession and his move to New York in 1906 mark a shift in his production, as it grew to encompass commercial portraiture and an increasing commitment to teaching, which ultimately led him to establish the first institutions in America to combine instruction in both technical and aesthetic aspects of photography.The book also incorporates new formal and scientific analysis of White’s work and techniques, a complete exhibition record, and many unpublished illustrations of the moody outdoor scenes and quiet images of domestic life for which he was revered.

“In the book. . . . It is the faux medieval costumes; the vague, dewy (Ms. McCauley’s word) images; the faces buried in shadow; and the saccharine melodrama that earned Pictorialism its dismissal. But by showing White’s work in its contemporaneous artistic, social and political contexts, Ms. McCauley makes it possible for it to be reassessed.”—William Meyers, Wall Street Journal

Anne McCauley is David Hunter McAlpin Professor of the History of Photography and Modern Art at Princeton University.