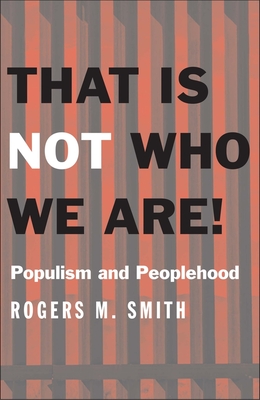 That Is Not Who We Are!

How can liberals offer “stories of peoplehood” that can compete with illiberal populist and nationalist stories?

Rogers Smith has long argued for the importance of “stories of peoplehood” in constituting political communities. By enabling a people to tell others and themselves who they are, such stories establish the people’s identity and values and guide its actions. They can promote national unity and unity of groups within and across nations. Smith argues that nationalist populists have done a better job than liberals in providing stories of peoplehood that advance their worldview: the nation as ethnically defined, threatened by enemies, and blameless for its troubles, which come from its victimization by malign elites and foreigners. Liberals need to offer their own stories expressing more inclusive values. Analyzing three liberal stories of peoplehood—those of John Dewey, Barack Obama, and Abraham Lincoln—Smith argues that all have value and all are needed, though he sees Lincoln’s, based on the Declaration of Independence, as the most promising.


Praise For That Is Not Who We Are!: Populism and Peoplehood (Castle Lecture Series)…

"Rogers Smith brings decades of distinguished scholarship to bear on competing narratives of national identity, around the world and in the United States. In That Is Not Who We Are!, he offers a hopeful message: we need not choose between inclusive and emotionally resonant accounts of who we are."—William A. Galston, author of Anti-Pluralism


“A beautiful work of civic scholarship. Staring down the resurgence of reactionary populism, Rogers Smith offers a transformative, egalitarian story of U.S. peoplehood—one inviting us to become a better version of ourselves.”—Jack Turner, author of Awakening to Race: Individualism and Social Consciousness in America

Rogers M. Smith is the Christopher H. Browne Distinguished Professor of Political Science at the University of Pennsylvania. He served as president of the American Political Science Association in 2018–2019.
Loading...
or
Not Currently Available for Direct Purchase