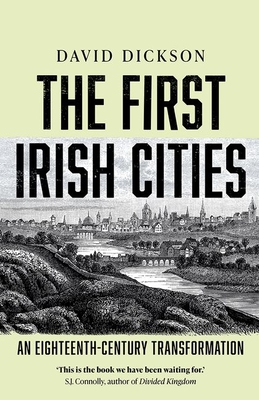 A backward corner of Europe in 1600, Ireland was transformed during the following centuries. This was most evident in the rise of its cities, notably Dublin and Cork. David Dickson explores ten urban centers and their patterns of physical, social, and cultural evolution, relating this to the legacies of a violent past, and he reflects on their subsequent partial eclipse. Beautifully illustrated, this account reveals how the country’s cities were distinctive and—through the Irish diaspora—influential beyond Ireland’s shores.


Praise For The First Irish Cities: An Eighteenth-Century Transformation…

“Dickson has written what is probably the most important work on Irish towns ever published…The First Irish Cities is scholarly, authoritative, elegantly written, beautifully illustrated, and a delight to read.”—Leslie Clarkson, Familia

'This is the book we have been waiting for. Dickson provides the first comprehensive overview of the great age of Irish urban development, in all its complexity and variety.'—Sean Connolly, author of Divided Kingdom

David Dickson is professor emeritus of Modern History in Trinity College Dublin. His previous books include Dublin: The Making of a Capital City, Old World Colony: Cork and South Munster 1630–1830, and New Foundations: Ireland 1660–1800, Revised Edition.
Loading...
or support indie stores by buying on
(This book is on backorder)