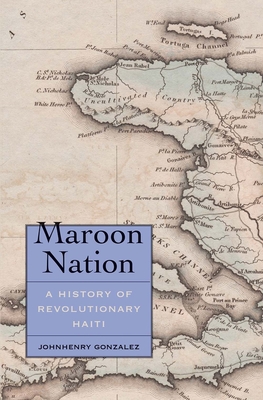 A new history of post‑Revolutionary Haiti, and the society that emerged in the aftermath of the world’s most successful slave revolution

Haiti is widely recognized as the only state born out of a successful slave revolt, but the country’s early history remains scarcely understood. In this deeply researched and original volume, Johnhenry Gonzalez weaves a history of early independent Haiti focused on crop production, land reform, and the unauthorized rural settlements devised by former slaves of the colonial plantation system. Analyzing the country’s turbulent transition from the most profitable and exploitative slave colony of the eighteenth century to a relatively free society of small farmers, Gonzalez narrates the origins of institutions such as informal open-air marketplaces and rural agrarian compounds known as lakou. Drawing on seldom studied primary sources to contribute to a growing body of early Haitian scholarship, he argues that Haiti’s legacy of runaway communities and land conflict was as formative as the Haitian Revolution in developing the country’s characteristic agrarian, mercantile, and religious institutions.

“Gonzalez’s ambitious work demands the attention of scholars who study Atlantic revolutions, environmental history, and those interested in the growing field of global history.”—Journal of Interdisciplinary History

“Gonzales’ ambitious work demands the attention of scholars who study Atlantic revolutions, environmental history, and those interested in the growing field of global history.”—Ruma Chopra, Journal of Interdisciplinary History

“The book deepens our understanding of nineteenth-century Haiti and seeks to understand what the revolution and its aftermath really meant and continues to mean for Haitians themselves.”—Elena Schneider, H-Net

“[A] major intervention . . . Gonzalez not only reshapes debates about the Haitian Revolution but also suggests new perspectives on the development of agrarian life in Europe and elsewhere.”—Jeremy D. Popkin, Journal of Modern History

"Gonzalez depicts the disillusioning dimensions of a post-revolutionary Haitian state that attempted to keep former slaves working on sugar plantations. Yet he reveals the powerful story of Haitians’ final revolutionary triumph, as they nonetheless transformed themselves into independent farmers and thrived for generations."—Richard Turits, author of Foundations of Despotism: Peasants, the Trujillo Regime, and Modernity in Dominican History

"Maroon Nation contributes uniquely to a growing body of scholarship on the aftermath of the world’s only successful slave revolution and underlines the existence of conflicting visions of freedom in nineteenth-century Haiti.”—Julia Gaffield, Georgia State University, author of Haitian Connections in the Atlantic World: Recognition after Revolution

“Turning a centuries-old stereotype of ‘primitivity’ on its head, Gonzalez’s bold account shows how former Haitian slaves defended hard-won freedoms by creating an alternative to the purportedly modern plantation economy.”—Thomas C. Holt, author of The Problem of Freedom: Race, Labor, and Politics in Jamaica and Britain, 1832-1938

“Maroon Nation offers a fascinating account of early independent Haiti’s remarkable economic and social transformation. Bringing together a wide-range of archival sources, along with insights drawn from songs, proverbs and religious practices, Gonzalez offers an engrossing portrait of a world in which small-scale land ownership became the foundation for a rural culture of freedom and autonomy. A vital contribution to our understanding of Haitian and Caribbean history.”—Laurent Dubois, author of Avengers of the New World: The Story of the Haitian Revolution and Haiti: The Aftershocks of History

Johnhenry Gonzalez is a lecturer in Caribbean history at the University of Cambridge, where he teaches on colonialism, Atlantic slavery, and the African diaspora in the New World.
Loading...
or
Not Currently Available for Direct Purchase