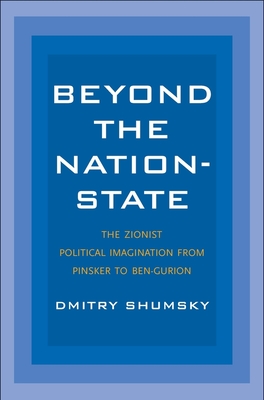 Beyond the Nation-State (Hardcover)

The Zionist Political Imagination from Pinsker to Ben-Gurion

A revisionist account of Zionist history, challenging the inevitability of a one-state solution, from a bold, path-breaking young scholar

The Jewish nation-state has often been thought of as Zionism’s end goal. In this bracing history of the idea of the Jewish state in modern Zionism, from its beginnings in the late nineteenth century until the establishment of the state of Israel, Dmitry Shumsky challenges this deeply rooted assumption. In doing so, he complicates the narrative of the Zionist quest for full sovereignty, provocatively showing how and why the leaders of the prestate Zionist movement imagined, articulated, and promoted theories of self-determination in Palestine either as part of a multinational Ottoman state (1882–1917), or in the framework of multinational democracy.

In particular, Shumsky focuses on the writings and policies of five key Zionist leaders from the Habsburg and Russian empires in central and eastern Europe in the late nineteenth and early twentieth centuries—Leon Pinsker, Theodor Herzl, Ahad Ha’am, Vladimir Ze’ev Jabotinsky, and David Ben-Gurion—to offer a very pointed critique of Zionist historiography.

Dmitry Shumsky is a senior lecturer at the Department of Jewish History and Contemporary Jewry at the Hebrew University of Jerusalem, and  former director of its Cherrick Center for the Study of Zionism, the Yishuv and the State of Israel.

Praise For Beyond the Nation-State: The Zionist Political Imagination from Pinsker to Ben-Gurion…

"Beyond the Nation State not only provides a refreshing look into Zionist history, but has striking relevance for today’s Israel. One would like to make it compulsory reading."—Michael Brenner, Reading Religion
"This is an important book. It is admittedly polemical but also creative, well argued, and penetrating. It aims to shift paradigms, and it succeeds in this goal."—Brian Horowitz, H-Net Reviews
"Beyond the Nation-State makes an important contribution."—Nadav Shelef, Israel Studies
"A thought-provoking, evidence-based study. . . . the pre-1937 ideas Shumsky brilliantly analyzes are in my reading profoundly more relevant today than they have ever been during the years they were articulated."—Moshe Behar, H-Net Reviews
“A must-read for scholars in the field, this is a brilliant, trenchant critique of current dominant interpretations of the Zionist movement and the birth of the state of Israel.”—Alon Confino, author of A World Without Jews
“This provocative study disrupts the uncontested link between Zionism and statism. It will no doubt ignite important popular and scholarly debates about the past, present, and future significance of Zionism and the state of Israel.”—Noam Pianko, University of Washington

“Beyond the Nation State brilliantly situates Zionism in the context of early twentieth‑century European political theory and global debates over minority rights. This is a must-read for all students of modern Jewish politics.”—Eliyahu Stern, Yale University

“Dmitry Shumsky’s recovery of pre‑WWI Zionist aspirations for Jews to live as autonomous nations in multinational imperial states is revelatory. His analysis is exquisite—offering hope that a deeper understanding of Zionism could liberate Israeli Jews searching for a way to live in a binational society.”—Ian Lustick, University of Pennsylvania