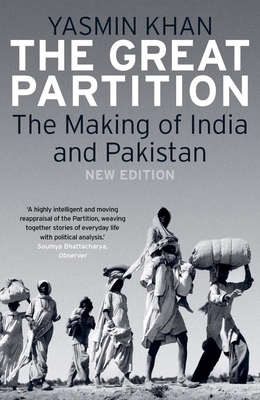 The Making of India and Pakistan

"Eloquently discusses the making of India and Pakistan after British rule on the subcontinent was dismantled in 1947. . . . A new look at this still important subject."—Library Journal

This new edition of Yasmin Khan’s reappraisal of the tumultuous India-Pakistan Partition features an introduction reflecting on the latest research and on ways in which commemoration of the Partition has changed, and considers the Partition in light of the current refugee crisis.

Reviews of the first edition:

“A riveting book on this terrible story.”—Economist

“Many histories of Partition focus solely on the elite policy makers. Yasmin Khan’s empathetic account gives a great insight into the hopes, dreams, and fears of the millions affected by it.”—Owen Bennett Jones, BBC

Praise For The Great Partition: The Making of India and Pakistan…


"Mahatma Gandhi called the traumatic experience of Partition 'the vivisection of India'. In this book, Yasmin Khan shows how this operation was performed. She describes the suffering of the victims with great sensitivity, and traces the perceptions of contemporary observers, most of whom were at a loss when trying to imagine the contours of the new states. To a country that took its territorial unity for granted, the partition of India came as a rude shock; its impact reverberates through the pages of this illuminating book."--Dietmar Rothermund, Professor Emeritus of South Asian History, Heidelberg University, and author of The Routledge Companion to Decolonisation and (with H Kulke) A History of India

"This is a compassionate and devastating book. It charts the long, complex and often brutal processes that engulfed millions of unsuspecting people in chaos. Few among the South Asian and British political elite could have imagined what they were letting loose, while many of those swept up even tangentially had no clear idea of what it might mean. Its long aftermath still scars the subcontinent, as India and Pakistan see each other through the lens of carefully constructed nationalist history which feeds on the partially understood history of Partition. This is a book for all who wish to understand attitudes on the subcontinent today."--Judith M Brown, Balliol College Oxford, and author of Nehru

"Yasmin Khan makes a significant contribution to the ongoing study of the Partition of India in this lucid account. Her eye for detail strongly evokes the issues, personalities and events at this crucial moment in the subcontinent's modern history. Narrative and sharp analysis go hand in hand in a work which bears all the hallmarks of a first-rate scholar."--Ian Talbot, University of Southampton

"Yasmin Khan's The Great Partition vividly and memorably portrays the sheer turmoil of decolonisation. In turning the spotlight away from high-level politics to bitter personal experience, she exposes the bewilderment, brutality and mayhem that followed the hasty British decision to 'divide and quit.' This book will be a touchstone in the retelling of one of the twentieth century's greatest calamities."--David Arnold, University of Warwick and Fellow of the British Academy and of the Royal Asiatic Society

"This is an exceptional book. Yasmin Khan has written a vivid, authoritative and accessible account of one of the greatest human tragedies and dislocations of the modern era. Her particular achievement is in weaving the lived experience of Partition - the agony, the uncertainty, the conflicting identities and loyalties - into a broader account of the turmoil and confusion which so gravely soured India's and Pakistan's achievement of independence."--Andrew Whitehead, editor of History Workshop Journal and former BBC South Asia correspondent

Yasmin Khan is associate professor of history and Fellow of Kellogg College, University of Oxford, and author of The Raj at War: A People’s History of India’s Second World War.