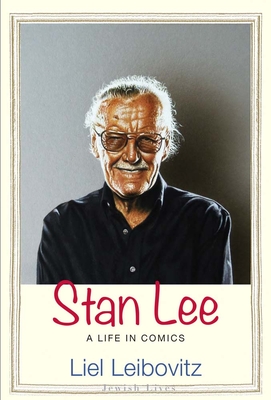 A Life in Comics (Jewish Lives)

From the prizewinning Jewish Lives series, a meditation on the deeply Jewish and surprisingly spiritual roots of Stan Lee and Marvel Comics

Few artists have had as much of an impact on American popular culture as Stan Lee. The characters he created—Spider-Man and Iron Man, the X-Men and the Fantastic Four—occupy Hollywood’s imagination and production schedules, generate billions at the box office, and come as close as anything we have to a shared American mythology.

This illuminating biography focuses as much on Lee’s ideas as it does on his unlikely rise to stardom. It surveys his cultural and religious upbringing and draws surprising connections between celebrated comic book heroes and the ancient tales of the Bible, the Talmud, and Jewish mysticism. Was Spider-Man just a reincarnation of Cain? Is the Incredible Hulk simply Adam by another name? From close readings of Lee’s work to little-known anecdotes from Marvel’s history, the book paints a portrait of Lee that goes much deeper than one of his signature onscreen cameos.


Praise For Stan Lee: A Life in Comics (Jewish Lives)…

"Mr. Leibovitz provides fresh interpretations of the Marvel universe, itself a super-heroic feat. Lee’s contentious heroes, he finds, take their cue from the Talmud, which unveiled spiritual truths through the clash of opposing interpretations."—Michael Saler, Wall Street Journal

"Fans of the legendary comic book writer and publisher will devour this expert mix of biography and literary analysis."—Publishers Weekly, Starred Review

"An analysis that goes deeper than most into the metaphysical vision of comics pioneer Stan Lee. . . . Leibovitz brings to the project a deep love for—and knowledge of—the comic-book world that Lee created. . . . Another solid addition to the series in which the author brings the seriousness his subject deserves."—Kirkus Reviews

"Leibovitz is a master storyteller. . . . [His] characteristically creative take on Lee, it should come as no surprise, surpasses the usual biographical fare. . . . Brilliant."—Rabbi Stuart Halpern, Jewish Journal

“Liel Leibovitz’s Stan Lee: A Life in Comics interprets Lee’s and his collaborators’ Marvel co-creations—such as the X-Men and Spider-Man—in a uniquely Jewish context, bringing fresh insights and added dimension to characters whose genius lies, in part, in their ability to credibly sustain such interpretations.”—Danny Fingeroth, author of A Marvelous Life: The Amazing Story of Stan Lee

“From one of our most incisive Jewish cultural critics—someone who is equally at home in the history of Jewish thought and text and the pop culture world of the postwar period—this is a thoroughly entertaining, deeply intelligent, and highly thoughtful work.”—Jeremy Dauber, author of Jewish Comedy: A Serious History

Liel Leibovitz is the author of A Broken Hallelujah: Rock and Roll, Redemption, and the Life of Leonard Cohen. He is a senior writer for Tablet magazine and a cohost of its popular podcast, Unorthodox. He lives in New York City.
Loading...
or
Not Currently Available for Direct Purchase