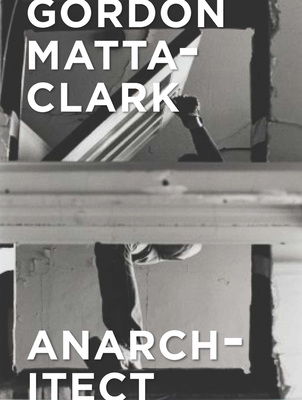 "Undoing is just as much a democratic right as doing."---Gordon Matta-Clark

This revealing book looks at the groundbreaking work of Gordon Matta-Clark (1943–1978), whose socially conscious practice blurred the boundaries between contemporary art and architecture. After completing a degree in architecture at Cornell University, Matta-Clark returned to his home city of New York. There he employed the term “anarchitecture,” combining “anarchy” and “architecture,” to describe the site-specific works he initially realized in the South Bronx.

The borough’s many abandoned buildings, the result of economic decline and middle-class flight, served as Matta-Clark’s raw material. His series Cuts dissected these structures, performing an anatomical study of the ravaged urban landscape. Moving from New York to Paris with Conical Intersect, a piece that became emblematic of artistic protest, Matta-Clark applied this same method to a pair of 17th-century row houses slated for demolition as a result of the Centre Pompidou’s construction. This compelling volume grounds Matta-Clark’s practice against the framework of architectural and urban history, stressing his pioneering activist-inspired approach, as well as his contribution to the nascent fields of social practice and relational aesthetics.

Antonio Sergio Bessa is director of curatorial and education programs at the Bronx Museum of the Arts. Jessamyn Fiore is a New York–based curator and co-director of the Estate of Gordon Matta-Clark.
Loading...
or
Not Currently Available for Direct Purchase