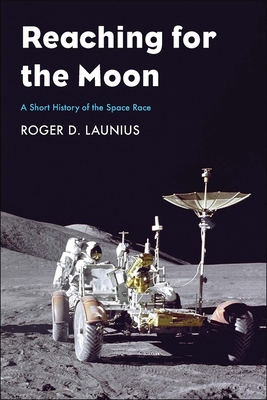 A Short History of the Space Race

Fifty years after the Moon landing, a new history of the space race explores the lives of both Soviet and American engineers

At the dawn of the space age, technological breakthroughs in Earth orbit flight were both breathtaking feats of ingenuity and disturbances to a delicate global balance of power. In this short book, aerospace historian Roger D. Launius concisely and engagingly explores the driving force of this era: the race to the Moon. Beginning with the launch of Sputnik 1 in October 1957 and closing with the end of the Apollo program in 1972, Launius examines how early space exploration blurred the lines between military and civilian activities, and how key actions led to space firsts as well as crushing failures.

Roger D. Launius retired in 2017 as the associate director for collections and curatorial affairs at the Smithsonian Institution’s National Air and Space Museum. Between 1990 and 2002 he served as chief historian for NASA. He lives in Auburn, AL.

Praise For Reaching for the Moon: A Short History of the Space Race…

“By giving Soviets equal time in the portrayal of the space race, Launius makes a real contribution to our understanding of the forces that motivated Americans to reach for the Moon.”—Howard McCurdy, American University
“An important, short book that is not simply a chronology of the Moon Race but a meditation on the reasons for the success of Apollo and an exploration of its legacy.”— Asif Siddiqi, Fordham University
"Twelve people, all Americans, walked on the lunar surface between 1969 and 1972. In this concise but authoritative account, Roger Launius tells us how the U.S. beat the Soviet Union to the Moon, and reflects on the lasting significance of that remarkable success."—John M. Logsdon, author of John F. Kennedy and the Race to the Moon
“Roger Launius’s keen analysis penetrates the stale metanarrative that for the past five decades has dominated—and, in key respects, misled—our understanding of the American and Soviet space programs. More than a great read, it is a must read for anyone interested in the fascinating but overly mythologized story of the Moon race.”—James R. Hansen, author of the New York Times Bestseller First Man: The Life of Neil A. Armstrong