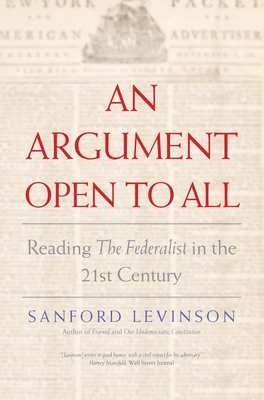 An Argument Open to All (Paperback)

Reading "The Federalist" in the 21st Century

In An Argument Open to All, renowned legal scholar Sanford Levinson takes a novel approach to what is perhaps America’s most famous political tract.  Rather than concern himself with the authors as historical figures, or how The Federalist helps us understand the original intent of the framers of the Constitution, Levinson examines each essay for the political wisdom it can offer us today. In eighty-five short essays, each keyed to a different essay in The Federalist, he considers such questions as whether present generations can rethink their constitutional arrangements; how much effort we should exert to preserve America’s traditional culture; and whether The Federalist’s arguments even suggest the desirability of world government.

Praise For An Argument Open to All: Reading "The Federalist" in the 21st Century…

"[Levinson] writes in good humor, with a civil respect for his adversary."—Harvey Mansfield, The Wall Street Journal
"Levinson’s scholarship and jurisprudence are indisputable."—Publishers Weekly
"A clear-eyed description and analysis of the thinking of some of the most iconic figures in the political history of the United States."—Kirkus Reviews
"This book is a delight, and an excellent introduction to The Federalist. Almost anyone, whether beginner or experienced scholar, can benefit from reading Levinson's take on these classic essays."—Jack M. Balkin, Yale Law School
"Sanford Levinson has one of the most original minds in the American legal community, and it is on full display in this wonderful new book."—Alan Wolfe, Boston College
"Levinson's brilliant short essays do much more than bring extraordinary insight to one of our most important Founding documents. They show how the questions posed by The Federalist are timeless, global and as compelling today as they were when written.  Levinson gives more relevance to The Federalist than it has had since 1788.   Fascinating and important."—Elliot Gerson, The Aspen Institute
"In his new examination of the Federalist Papers, Levinson lays out a powerful case for believing that the Founders, far from thinking government should be constrained, were focused instead on how to give it sufficient power to function effectively. Agree with him or not, Levinson’s is a brilliant and well-constructed brief for rethinking what our Founders were trying to say."—Former Congressman Mickey Edwards, author of The Parties versus the People: How to Turn Republicans and Democrats into Americans