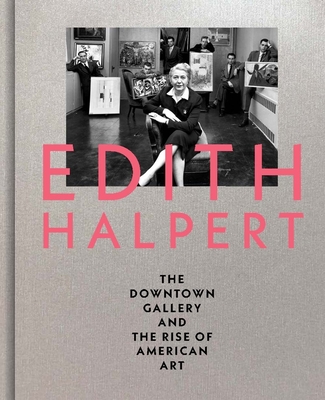 Edith Halpert, the Downtown Gallery, and the Rise of American Art

A New York Times critics’ top art book of 2019, this volume tells the fascinating story of an art-world tastemaker who effectively defined American art in the 20th century

The question “What is American art?” might conjure the hyperrealism of Raphaelle Peale and William Harnett, the bold graphic style of Stuart Davis and Jacob Lawrence, or the Precisionist forms of Charles Sheeler. Little known, however, is that such notions of American art are significantly owed to a Russian Jewish immigrant named Edith Halpert. The founder of the Downtown Gallery in New York, Halpert shaped an identity for American art, declaring that its thrilling heterogeneity and democratic values were what most distinguished it from the European avant-garde.

For forty-plus years, Halpert’s gallery brought recognition and market success to now-legendary American artists—among them Arthur Dove, Marsden Hartley, and Georgia O’Keeffe, in addition to the artists mentioned above. She relentlessly championed nonwhite, female, and unknown artists and was a formative advisor in the shaping of many of the nation’s most celebrated art museums and collections, from San Francisco to Boston. Not content with those achievements, she also pioneered the appreciation and collecting of American folk art.

Richly illustrated with works that passed through her groundbreaking gallery, this book tells the extraordinary and largely overlooked story of her career and legacy. The artists Halpert launched into the American canon are household names—and this book compellingly argues that hers should be, as well.

Praise For Edith Halpert, the Downtown Gallery, and the Rise of American Art…

“A necessary resource for studying the reception of American art during the mid-twentieth century, the art market, entrepreneurial women, immigrants, and more.”—Diane Tepfer, Woman’s Art Journal

“Edith Halpert, the Downtown Gallery, and the Rise of American Art is now a necessary resource for studying the reception of American art during the mid-twentieth century, the art market, entrepreneurial women, migrants,and more.”—Diane Tepfer, Woman’s Art Journal

Rebecca Shaykin is associate curator at the Jewish Museum, New York.
Loading...
or
Not Currently Available for Direct Purchase