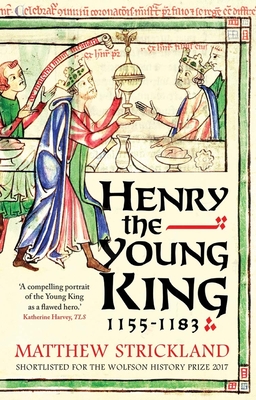 This first modern study of Henry the Young King, eldest son of Henry II but the least known Plantagenet monarch, explores the brief but eventful life of the only English ruler after the Norman Conquest to be created co-ruler in his father’s lifetime. Crowned at fifteen to secure an undisputed succession, Henry played a central role in the politics of Henry II’s great empire and was hailed as the embodiment of chivalry. Yet, consistently denied direct rule, the Young King was provoked first into heading a major rebellion against his father, then to waging a bitter war against his brother Richard for control of Aquitaine, dying before reaching the age of thirty having never assumed actual power. In this remarkable history, Matthew Strickland provides a richly colored portrait of an all-but-forgotten royal figure tutored by Thomas Becket, trained in arms by the great knight William Marshal, and incited to rebellion by his mother Eleanor of Aquitaine, while using his career to explore the nature of kingship, succession, dynastic politics, and rebellion in twelfth-century England and France.

SHORTLISTED FOR THE 2017 WOLFSON PRIZE

'In Matthew Strickland’s study of King Henry, royal son of Henry II and Eleanor of Aquitaine, we have not just the fascinating narrative of a flawed hero’s turbulent life but also a brilliant analysis of the culture of politics at the Angevin court.' - John Gillingham, author of Richard I

'This important study of Henry II’s son, the Young King, provides many new insights into the culture and politics of the Angevin Empire, from tournaments to rebellions. The evidence is skilfully used to tease out the character of a neglected figure, and to set his career in a wide European context.' - Michael Prestwich, author of Edward I


'This book is brilliant; it is the best biography of a medieval ruler I have ever read. It will be a lasting monument to both the Young King Henry and to Matthew Strickland's considerable scholarship.' - Stephen Church, author of King John: England, Magna Carta and the Making of a Tyrant

An expert on political culture, chivalry, and medieval warfare, Matthew Strickland is professor of medieval history at the University of Glasgow, Scotland.
Loading...
or
Not Currently Available for Direct Purchase