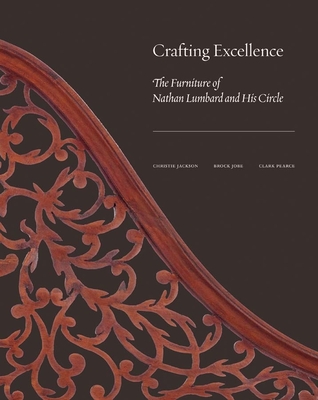 The Furniture of Nathan Lumbard and His Circle

When the inscription “Made by Nathan Lumbard Apl 20th 1800” was found in the late 1980s on a chest of drawers, the identity of an unknown craftsman suddenly surfaced. Crafting Excellence introduces the striking achievements of cabinetmaker Nathan Lumbard (1777−1847) and a small group of craftsmen associated with him. Working initially in the village of Sturbridge, Massachusetts, these artisans fashioned an array of objects that rank among the most colorful and creative of Federal America. Recent scholarship has revealed Lumbard’s connection with the cabinetmaker Oliver Wight, from whom he likely learned his trade and gained an understanding of neoclassicism. Careful study of objects linked to Lumbard, Wight, and nearby artisans has produced a framework for identifying their work. The discovery of Lumbard’s name three decades ago led the authors on a pioneering journey, culminating in this handsome volume, an insightful contribution to American furniture history.