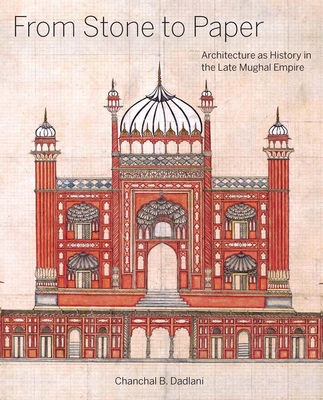 From Stone to Paper

Architecture as History in the Late Mughal Empire

By the 18th century, the Mughal Empire was well beyond its so-called golden age. Its control of the Indian subcontinent was increasingly threatened by regional Indian states, as well as by the encroaching British Empire. In response to a rapidly changing sociopolitical landscape, the Mughal emperors used architecture to harness their illustrious past and stage cultural authority for contemporary audiences. Chanchal Dadlani provides the first in-depth look at this crucial period of architectural history. Discussing a rich array of built forms and urban spaces—from grand imperial mosques to Delhi’s bustling thoroughfares—the volume sheds light on long-overlooked buildings. It also explores representations of architectural monuments that circulated in the form of building plans, manuscript paintings, and postcards. Ultimately, the book reveals how Mughal architects, artists, and patrons built on the cultural legacy of their imperial predecessors to create the very concept of a historical style identifiable as Mughal.

Praise For From Stone to Paper: Architecture as History in the Late Mughal Empire…

“Crisp, engaging, and lavishly illustrated, this book is not a comprehensive survey of eighteenth-century Mughal architecture, but a thought-provoking methodological contribution to the field of Mughal studies and to ongoing conversations on the global eighteenth century.”—Laura E. Parodi, caa.reviews

Shortlisted for the 2019 Kenshur Prize for the best book in Eighteenth-Century Studies, sponsored by the Indiana Center for 18th Century Studies

Finalist for the Charles Rufus Morey Award, sponsored by the College Art Association

"In a bold new cultural history, Dadlani traces how Mughal architectural style was canonized over the 18th century, just in time to become one with the very idea of India in the Western imagination."—A. Azfar Moin, The University of Texas at Austin

“Professor Chanchal Dadlani has produced the first full-length book on 18th-century Mughal architecture whose buildings are often dismissed as unworthy of study.  Her exciting and richly illustrated volume provides deep insight to this period, making us rethink our fundamental understandings of the later Mughals.”—Catherine B. Asher, University of Minnesota

“From Stone to Paper is a passionate and lucid scholarly argument for the vitality of late Mughal architecture and urbanism and for its crucial significance on the historical trajectory of South Asian transitions from early modern to modern and contemporary periods.”—Sussan Babaie, author of Isfahan and Its Palaces

Chanchal B. Dadlani is associate professor of art and architectural history at Wake Forest University.
Loading...
or
Not Currently Available for Direct Purchase